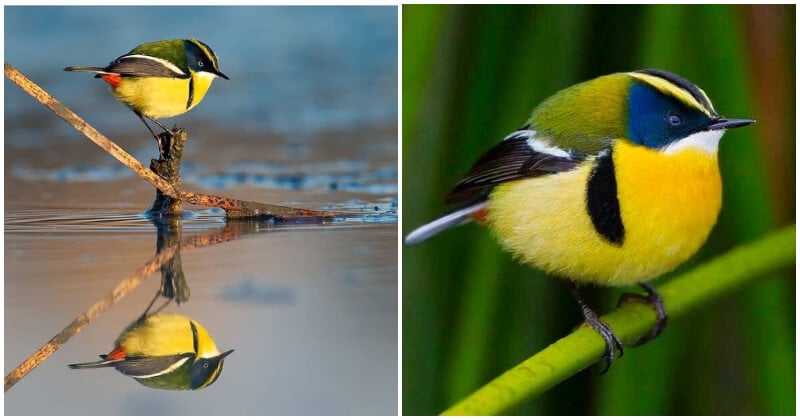 There are many spectacular tiny chubby birds in the wild. These little shapes are put on one-of-their-kind coats, making them conspicuous whenever they appear. In other words, these creatures have the charisma to make us fall in love with them. They are tiny but shine brightly in their colony!

The many-colored rush tyrant is one of these stunning little birds. As its name suggests, this species has colorful plumage. The bright yellow splashes all over its belly while the olive green dyes its back and rump. Its face is gray and blue with a yellow stripe on the top of its head.

These tiny three-inch birds also have a black and a white hue on their suit. White throat, white bars on the black wings, and white edges on the black tail. Just look! they have a red rump!

Many people dub this species a dazzling rainbow of color. Do you agree?

Let’s admire the enchanting plumage of these cute tiny birds below!

Like many other birds, females of the many-colored rush tyrant are duller than males. Young birds also lack the gorgeous plumage of adults.

These adorable fluffy little birds have a large range. They distribute in South America, from southeast Brazil to southern Argentina to central Chile. They can also be found in the Andes of south-east Peru and west Bolivia, and the Antofagasta Region in northern Chile.

Despite the wide-scale, the many-colored rush tyrant does face threats due to habitat loss and water pollution.

They prefer living in marshland and reedbeds around lakes and rivers where they spend time foraging for food.

During the breeding season, the females build their cone-shaped nests to the side of a single reed stalk. This nest is made from wet vegetation and dries over time. However, they need to improve their stability in windy weather. The females then lay 2 – 3 eggs and incubate them. They continue to feed the hatchlings until fully-fledged. Noticeably, the males join their partners in this process.

20+ Pet Owners Who Get Surprised With Their 4-Legged Friends

10+ Pets Before And After Losing Weight, And They Are All Adorable