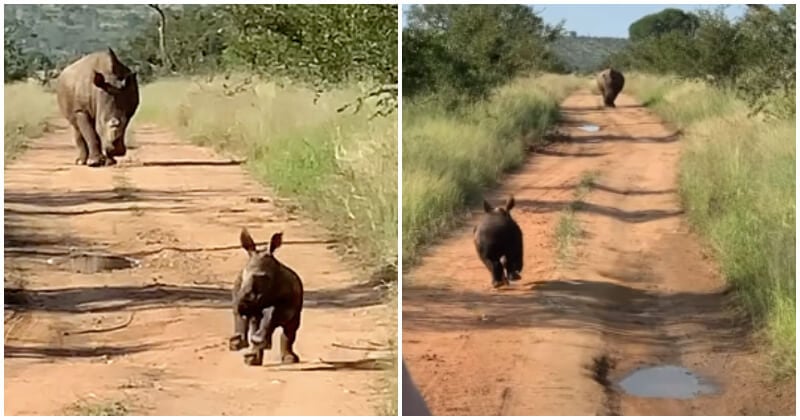 Baby wild animals can be adorable like our cats and dogs. They are innocent and of course, do not realize how adorable their gestures and actions are. We can’t even stay mad at these cuties when they commit “petty” crimes. Their born cuteness certainly wins our hearts. Who can resist? What will happen if a cute baby rhino tries to show a group of tourists that he is tough and strong? The young little boy decided to charge at those humans when he spotted them from afar. The lovely thing here is he changed his mind and ran away when finding himself just a few feet away from them. The calf’s “toughness” melts the tourist’s hearts instead of getting them scared. He fails at his work but successfully defeats these people with his cuteness. This adorable footage was captured at the Londolozi Private Game Reserve in Kruger National Park by Darren Sheer. He and his family encountered the playful baby rhino when they were admiring him and his mom from a safe distance in a safari vehicle.

Let’s see how cute the baby rhino is in the video below!

“I was with my family, and the rhino baby was with his family,” Darren described the lovely scenes. “It reminded us to remember the special moments in our own family. They’re just special moments that you won’t forget.” Darren was astonished at first but he immediately took out his camera and snapped cute moments of the rhino calf. The young boy wants humans to know that he will do everything to defend himself and his mom. Although he doesn’t make a great job now, he can do it when he is grown up. If you are looking for vitamins for your Friday, just give this video a look. It went viral in an instant when shared on the Internet. People can’t get enough of the cuteness of the rhino calf.

Girl Having Pet Snake Knows Her Friend Doesn’t Come To Her Party Due To Her Pet, She Decides To Exclude Her

Cling Tightly To Each Other At Shelter, Abandoned Dog Siblings Can Finally Smile Again As They Find Forever Home