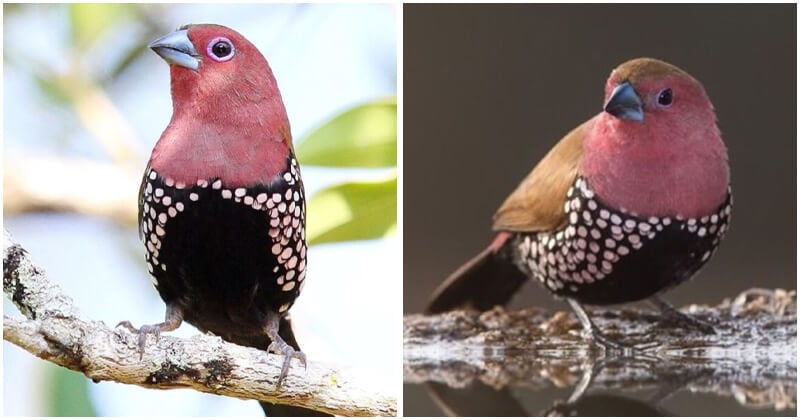 Looking at this charming bird, you will feel like you are seeing a retro lady with great taste in fashion. It just looks so unreal it could make you feel like you are traveling back in time and getting lost inside a fairy tale.

This estrildid finch comes from the family Estrildidae. It is also known under the binomial name of hypargos margaritatus, which literally means “a small monster with a hundred pearly eyes”.

The pink-throated twinspot also has a plump shape and distinctive polka-dotted belly like other twinspots, but it’s the guava pink on its face, throat and crown that makes this bird one of a kind. Its charisma is just so strong it makes the bird stand out wherever it appears.

Even though they share the same name, the female doesn’t have that gorgeous pink shade on its coat like the male. Instead, its plumage is more like a combination of different brown tones, except for the eye-catching white polka dots on the black patches on both sides of its underpart.

This species is mainly spotted in South Africa, typically Mozambique and Eswatini. It also lives in a few provinces like KwaZulu-Natal, Mpumalanga and Limpopo.

Just take a look at this alluring creature:

This birdy mostly feeds on seeds of grasses, but in captivity, it accepts insects too.

There were only two pink-throated twinspot nests found in the wild so its breeding habits still remain a mystery despite its large range. However, it’s reported that each pink-throated twinspot female often lays three to four eggs and that’s everything we know so far. In captivity, the chicks could live under the care of the parents for 20 – 21 days.

This bird’s population is considered to be stable at this moment, so it’s no surprise that this little birdie lies among the least concerned ones on the IUCN Red List.

20 Shameless Pets Who Are Pretty Gifted At Acting Crazy

This Corgi And Cat Are Inseparable Friends