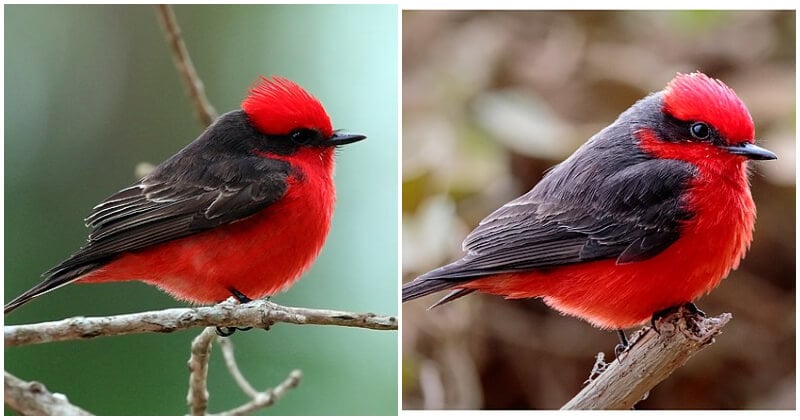 I’m not truly a birdwatcher but fall in love with tiny chubby birds. These creatures are incredibly adorable and look like fluffy flying balls. They have one-of-their-kind plumage, making them conspicuous in their colony. The amazing thing is their coats are multi-colored but do not look messy at all. Instead, they make a name for these birds. Who can resist the cuteness of small pretty living creatures? The scarlet flycatcher is one of these striking birds. They have gorgeous scarlet red on their bellies and crowns. Their upperparts, however, are a black color, creating an unmistakable contrast for these birds. Just look! there is a black mask around their eyes. Their bills and legs also have the same color. Many people dub them knights of the dark.

You can watch the video of this bird below!

Unlike stunning male birds, the female of this species is a more subtle shade of brown. But they still shine in their own ways. Scarlet flycatchers are a close relative of the orange-colored vermilion flycatcher. They distribute widely, from Central America into much of South America. These birds are usually found in extreme southwestern United States, through Mexico, south, right down into Argentina. This species is quite common. You can spot them taking a break on the fencepost along the roadside. If you bump into them, don’t forget to take our your camera and snap pictures of these lovely birds. They prefer living in open bushy areas and woodlands where they feed mainly on insects. When the breeding season begins, the male scarlet flycatcher uses shiny insects as gifts for his mate. He keeps doing this during the season. The female then builds her nest, lays eggs, and incubates them. She continues to feed the hatchlings until fully-fledged.