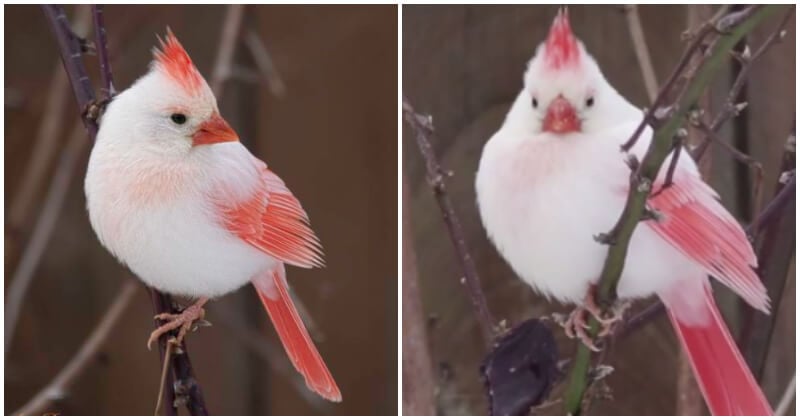 You may spot stunning rare white cardinal somewhere on social media. There are many photos and videos about them.

You may spot stunning cardinals somewhere on social media. There are many photos and videos about them. If you are lucky, you may even encounter these visitors right in your backyard. These birds are quite friendly with humans, so they sometimes pay a little visit to your garden. Scott Davis, a 67-year-old retiree in Gallatin, Tenessee has got that opportunity. But it was a once-in-a-lifetime encounter. He saw an incredibly rare white cardinal eating food in his backyard. Amazing!

The special bird got the old man astonished at first. However, he immediately took out his camera and filmed the stunning visitor.

“It’s actually the prettiest bird I think I’ve ever seen,” Scott said. “It’s an unnatural color. Maybe that’s what makes it so pretty. It’s just so odd and rare.”

Davis shared his video on Facebook and it went viral in an instant. People were amazed at the white cardinal. Some even contacted the old man to drop by his garden to see the bird. But he refused all as he didn’t want to be disturbed.

Regarding the bird’s white feathers, it’s caused by leucism. This condition results in partial loss of pigmentation in an animal, making it have white or patchily colored skin, hair, or feathers.

Davis is a lifelong birdwatcher. He often puts out food in his backyard to feed hungry birds. The incredibly rare white cardinal is among these visitors. However, it hasn’t returned since it flew off.

“Cardinals like sunflower seeds, so I threw a bunch out there on the snow and ice,” Scott recalled. “That’s when he came. He was probably out there between 10 and 15 minutes each time.”

If you love this striking bird, just share it with your family and friends. Nature is amazing!

Cat Knows How To Ask His Owner To Give Him Treats

Photoshopped Pictures Of This Wet Kitty Will Crack You Up!