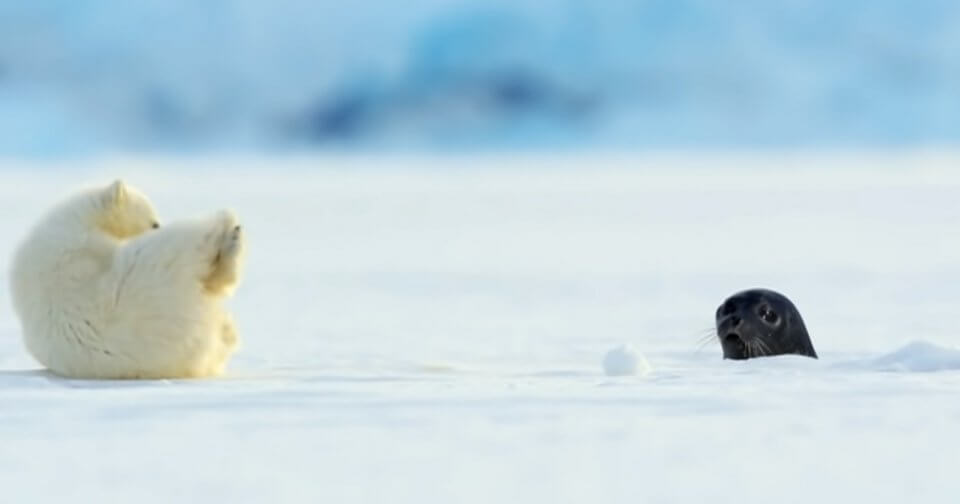 Even though we tend to think of the wildlife as a huge dangerous battlefield where different species compete against each other just to survive, there are actually hilarious and cheerful moments that make their life way more amusing and memorable than what we imagine. If you are in the mood for such cuteness to brighten up your day, this adorable polar bear family is right up your street.

That fearless polar bear mommy was spotted taking her two cubs out for a hunting lesson from the Svalbard islands to the North Pole, and little did she know that her whole lecture was caught on camera and aired worldwide. In fact, it has become one of the most loved moments in BBC’s series Snow Bear so far.

Of course, there’s nothing better for the young cubs than watching their parents in action, and that was exactly what this brave mom thought as she started her tour. Unfortunately, despite the fact that she was indeed a great teacher, her little cubs didn’t seem to be trustworthy students at all. While her daughter just wanted to take a nap on her bum…

But still, compared to her playful brother, the female cub was still the more enthusiastic one since she would have her own cubs to take care of someday. However, the hunt didn’t go on really smoothly as they all hoped. As the little girl excitedly looked for her dinner, she stumbled upon something she clearly did not expect.

A baby seal surprisingly popped out from the middle of nowhere and needless to say, the polar bear cub was literally shocked. She even ended up falling back miserably.

Let’s take a peek at the funny scene:

Aren’t they endearing? Please share this lovely moment with your friends and family!

Video Of Cat Saying “Well, Hi” Like A Southern Gentleman Is Taking The Internet By Storm

Almost Nobody Could Find The Cat In This Picture, And Her Owner Posted A Whole Gallery Of Her Ninja Cat