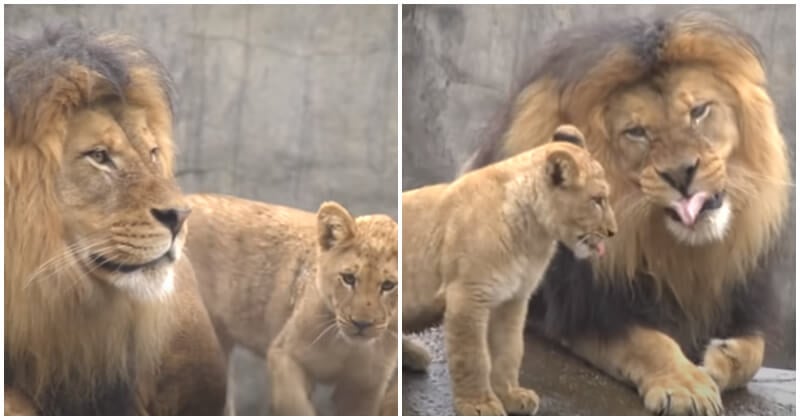 Male lions have long been seen as kings of the jungle. They do not take any part in the parenting process and have much patience and tolerance to their cubs as lionesses do. But even the sharpest and coldest hearts can melt when meeting right people. They are volunteer to love and take care of their loved ones. The 500lbs dad lion is no exception. Zawadi Mungu (name of the lion) gets soft when seeing his three cute baby girls for the first time. The majestic animal couldn’t resist the cuteness and innocence of his little babies when they rushed to him. Those adorable moments were captured at the Oregon Zoo. 6-month-old Kamali, Zalika and Angalia (names of the cubs) couldn’t more excited to see their dad. Although their proud dad looked hard to approach, the trio insisted to get his attention. And Zawadi fell for his adorable daughters. They tried their best to make their dad notice them and cuddle them. Zawadi seemed to be tolerant of his babies right away. Actually, he was a bit shocked when his little girls bumped into him. However, he didn’t get mad at them. It might be his way to accept his girls. A few days later, the lion dad was even seen grooming them and smiling at his cubs. They are his daughters and he just loves them in the way he is supposed to do. The bond between dads and daughters is so beautiful. It not only proved by us, humans but can also be seen in wild animals. Male majestic animals can be tolerant and patient dads.