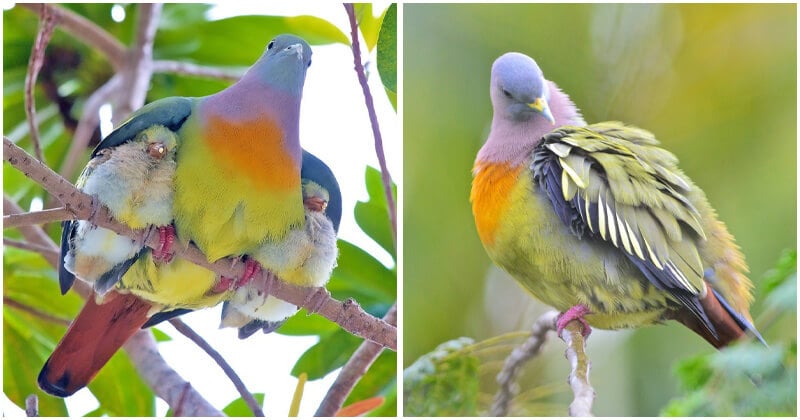 Dubbed As “Hot Pigeon“, The Pink-Necked Green Pigeon Is A Colorful Bird and their striking appearance can leave us all in awe.

Pigeons are one of the most common bird species that we can spot everywhere in this world. But looking at the gray and black feral pigeons on the streets daily, it’s hard to imagine there are a few colorful pigeons out there. However, they do exist in the wild, and their striking appearance can leave us all in awe.

Dubbed as the “hot pigeon”, the pink-necked green pigeon is definitely a gorgeous bird that worth your attention. This eccentric birdy is like a living palette of pastel colors and these distinctive shades look incredibly great with each other somehow. It’s that eye-catching combination that makes the bird an irreplaceable member of the pigeon and dove family, Columbidae.

As its name suggests, the pink-necked green pigeon has a pink neck and a mainly green plumage, but it’s not everything. The male pink-necked green pigeon also has a gray head, orange chest, black and yellow borders on both wings and gray and black tail. The female looks quite similar to the male, except for some duller parts on its body. The juveniles often resemble their mother.

Despite the unique coat, its size is medium like most pigeons on Earth. A pink-necked green pigeon measures about 9.8 – 11.8 inches in length and weighs about 105 – 160 g.

Even though we would love to see these charming birds wandering around in the city like their relatives, it’s almost impossible as they are native to the forests of Southeast Asia, typically Myanmar, Vietnam, Indonesia and the Philippines.

The pink-necked green pigeon has no interest in insects like many other birds. This friendly species mostly feed on fruits and its favorite food is always figs.

Male and females pink-necked green pigeons frequently team up to build their nest. The males search for materials, while the female is in charge of constructing. Each pair lay 2 eggs and they also jointly incubate the eggs for 17 days until they finally hatch and raise the chicks for about 10 days afterward.

The pink-necked green pigeon does show up in the IUCN Red List of Threatened Species but its population is quite stable at this moment.

Just take a look at this lovely creature: