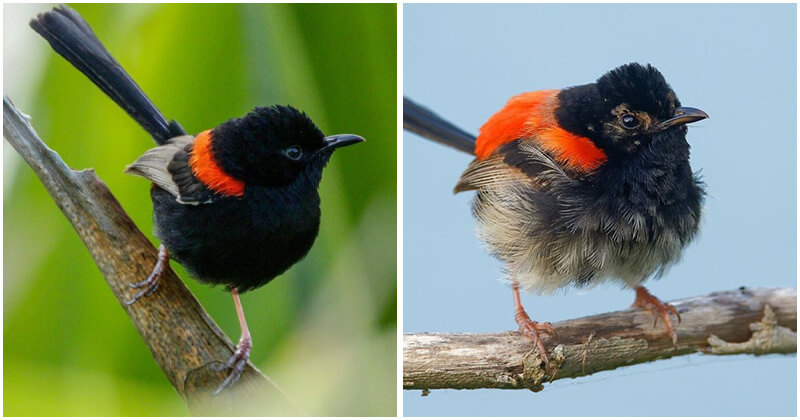 It’s no secret that everything looks cuter when it’s small and chubby, and of course birds are no exception. With its side and its shape, the red-backed fairywren could melt anyone’s heart.

The red-backed fairywren (also known under the scientific name of Malurus melanocephalus) is a species of passerine bird in the Maluridae family of Australasian wrens. As the name of its family suggests, this bird is seen in Australia and Australia only. It mostly lives near rivers and coastal areas, especially the wet, grassy tropical or sub-tropical places in the north of the continent.

This striking birdy is the smallest member of the Maluridae family, it only measures about 4.5 in and weighs 5 – 10 g. Despite that tiny body, the red-backed fairywren still looks extremely prominent in its natural habitats thanks to the gorgeous silky black plumage that is highlighted by a conspicuous red patch on its back (hence the name).

Like many other birds, the red-backed fairywren female looks a bit duller compared to the male. It wears a brown coat and its underparts are also paler too. This tiny critter doesn’t have the distinctive blue tint in its tail like other females of fairywren species neither. However, it is still an adorable little birdy that we would be honored to look at.

The red-backed fairywren’s favorite food is insects and it feeds on many different types of insects including beetles, bugs, grasshoppers, moths, wasps and cicadas.

Its hunt often begins when the sun comes up as this bird is diurnal and always becomes energetic throughout the day.

Most of the red-backed fairywrens are monogamous and their breeding season starts in August and often ends in February, which is also the rainy season in northern Australia.

After mating, the females build the nest, lay eggs and incubate the eggs themselves and only need the males’ help when it comes to raising the chicks, which last for about 11 – 12 days. Each red-backed fairywren often lays about 4 eggs each time.

To everyone’s relief, this beautiful bird’s population is quite stable at this moment. Just take a moment to admire its charming appearance and its sweet sound: