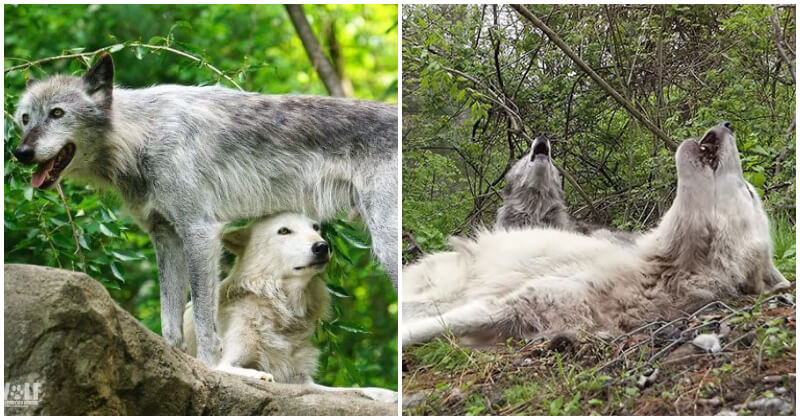 It’s not strange to see the laziness in animals. It is a trait that is shared among many species. Cats, koalas, and pandas are on this list. If you are raising cats, you will probably see that these furry friends can sleep through the day. Snuggling up to you and asking for your belly rub, they can sleep immediately. These playful creatures even doze off in any place that they like. My neighbor’s cat climbs a tree and takes a nap here every day. But it’s hard to imagine that wolves can be in that state. They are also lazy, even when they are howling. The case of two gray wolves in this story can prove this. They are spotted howling without bothering to stand up. The reason is that both are in the middle of their daily naps.

These majestic animals are supposed to howl under the light of a full moon, head tilted up high and standing stout. They look like kings of the jungle. However, this adorable pair of gray wolves break that perfect image. They put minimal effort into their 2-minute howls. These moments were filmed on camera and shared on the Internet. And, they went viral in an instant as people can’t get enough of the cuteness and laziness of two strong animals.

Alawa and Zephyr (names of the wolves) are currently living in the Wolf Conservation Center, a 501c3 non-profit organization in South Salem, New York. Both are representatives of the organization. Their responsibility is to help the public about wolves and their crucial role in nature’s ecosystem. Their species is now listed as endangered due to the loss of habitat and poaching.

They enjoy their days in the sanctuary together, napping lazily, for instance. “Although our ambassador wolves aren’t toughing it out on the wild landscape, just about everything they do they do together. They play together, sing together, groom one another and most importantly, love together,” Maggie Howell of the Wolf Conservation Center.

Alawa and Zephyr are strong but sometimes lazy ones. As you can see in the video, they howl for only 2 minutes while laying down on the ground. After that, they go back to snoozing. The lazy howls of two gray wolves may get some people shocked as they are popularly believed to howl at the moon. But it is not true. Their howls are a means of communication with other wolves. They howl to inform others of their location, of potential predators, and of prey.

10+ Adorable Photos Proving That Your Kids Need A Cat

20 Animals Who Are So Smart And Quick-Witted

Born Circa 1832, Jonathan The Tortoise Is Now The World’s Oldest Animal On Land