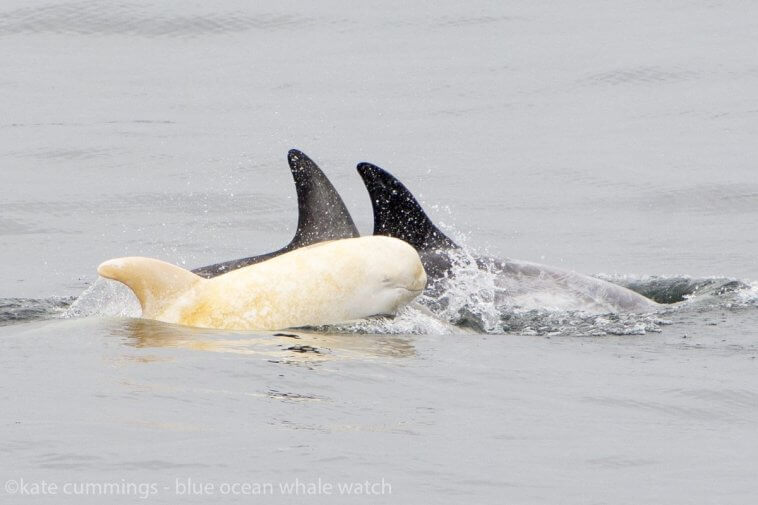 Searching for a baby albino dolphin swimming on California coast?While sailing off the Californian coast in Monterey Bay, the crew of a Blue Ocean Whale Watch boat came across a breathtaking sight – a baby albino dolphin swimming alongside its mom. Team member Kate Cummings managed to capture footages and photos of the incredibly rare marine mammal. It turned out to be a 3-year-old Risso dolphin, initially spotted in 2014, when it was just a few-month-old calf. The whale-watching team immediately recognized it and they were more than happy to see it in a very good health condition. “Albinism in the wild is incredibly rare, and I believe this is the only known albino Risso’s dolphin in the eastern Pacific,” Cummings told Live Science. “Seeing the dolphin felt incredibly special because it’s such a rare sighting.I saw this same dolphin two years ago – now it is around three years old, but is still with its mother.”

You can watch the video below:

The dolphin’s unusual coloring is due to albinism. A rare condition that occurs when the cells did not produce melanin, the skin coloration pigment. According to the National Oceanic and Atmospheric Administration albinism has been noticed in over 20 marine species, but it is pretty rare in dolphins. Even albino animals may look cute, this rare condition brings a lot of health and social problems for them with poor eyesight the most frequent one. They’re also frequently rejected by their groups and their unusual looking make them extremely vulnerable in front of predators. “Albino animals may be more prone to skin problems because there’s no melanin to protect the skin from ultraviolet rays, and they can have poor eyesight and hearing,” Cummings said. “As far as we can tell, this juvenile appears healthy.”

Animals Zodiac Signs – All information You Need To Know