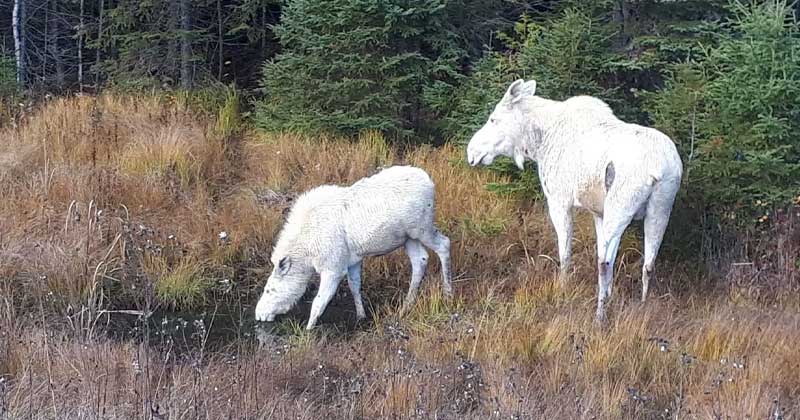 The world of animals is diverse. Mother nature created exceptionally rare animals. Many bear characteristics that we can’t believe that these still exist today. There is so much luck to spot and take pictures of them in real life. Jackie Burns Loyer was a lucky one. She spotted two white moose crossing the road while driving through the wooded areas of Northern Ontario.

The two rare white animals are an adult female and a calf. They were so shy that they stopped at the side of the highway for a few moments. Then, the two went into the bush. But that’s enough for Jackie. The woman didn’t hesitate to take out her camera and capture such precious moment.

“They’re so beautiful,” the woman told Global News. “They call them the spirit moose. They’re supposed to give you good luck.”

The stunning white moose is also called the ‘ghost’ or ‘spirit’ moose. Their white fur and skin are caused by a recessive gene. This difference makes these animals more stand out among their herd. These moose are albino but they aren’t. And, they are exceptionally rare, too.

“They are extremely unique and treasured. These highly protected animals are considered very spiritual,” according to the Northern Ontario Travel.

Below are the footage of them.