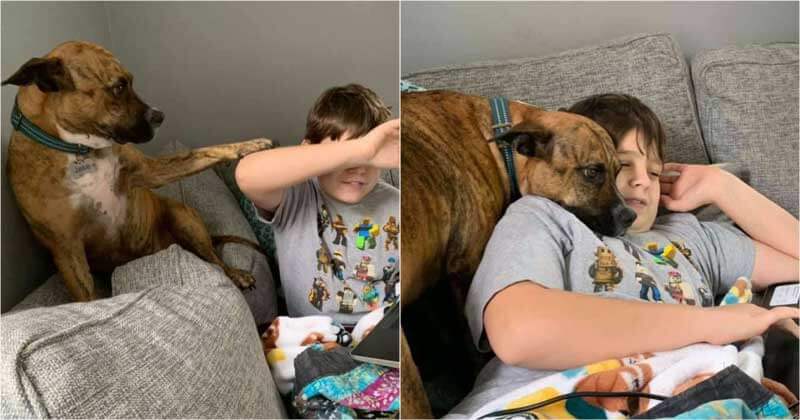 If you are raising a playful and quirky dog, you will get a lot of fun with him. These furry friends have their “tricks” to steal or sneak into personal places of their owners without getting them irritated. And this turns out incredibly hilarious, bring a lot of laughs to their humans. Jake, the rescued dog in this story is also a smart and mischievous guy. He always thinks that he is the center of attention at all times. If his human brother – his best friend, Owen doesn’t keep his eyes on him for such a long time, he must spring into action. Jake and Owen have a special bond, like many other dogs and kids. He loves following his human brother wherever he goes and wants to become his best companion.

“Jake waits by his bedroom door all the time and has a routine at night; when I tuck Owen in, Jake lays with him and refuses to leave the bedroom,” Owen’s mother, Westling said. The boy spent more time with his dogs when he was doing Zoom school at home. And of course, Jake couldn’t be more thrilled about it.

But things happened when Owen had to pay attention and focused on his lesson at school. The boy couldn’t cuddle or interact with his dog while he was in the middle of school.

Jake suddenly realized this and didn’t find it pleasing at all. The screen stole all the attention of his best friend. He must do something immediately. “For some reason, Jake was intrigued by Zoom and wanted to be part of the action,” Westling said.

Jake tried to do everything in his power to make his brother notice his presence right next to him. He wanted to prove that he was more important and more interesting than the school. The mischievous dog started pawing at and snuggling up to his brother as much as he could. And of course, the boy gave up. He couldn’t help but laugh at his very persistent best friend.

“Owen loves Jake, we all do, and his distractions, while probably not funny for the teachers, are quite amusing to us,” Westling said. “Jake feels as though he should be the center of attention at all times and he makes that known.” Jake was rescued by The Sato Project when he was living as a stray outside of a factory in Puerto Rico. The dog later was adopted by his present family and really enjoys living here.

The dog loves people and their care for him. He sometimes acts quirkily, doesn’t seem to know he’s a dog. He often sits like a human on the couch.

Jake also has another older human brother, Weston. He also loves him very much. Rescue The Fox And The Hound Build A Strong Bond, Proving Friendship Has No Barrier

Orphaned Kittens Desperately Need A Mom In Life, Then A Dog Makes Their Dream Come True!