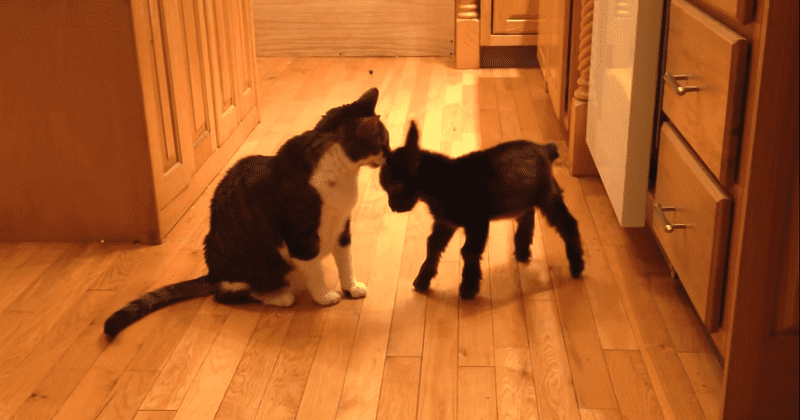 Cats have a reputation for being independent and distant. For this reason, when it comes to socializing with other animals, they always make for the best entertainment.

So when a video of a little goat attempting to headbutt a cat emerged on social media, it got everyone’s attention and went viral immediately. The video captured the hilarious moment of the goat repeatedly attempting to headbutt his feline friend. We can see that the cat doesn’t like it but he still tries to behave normally. And as the cat runs out of patience, she gives the goat a hilarious little warning nip to show him who’s really the boss in the house. At this point, the poor little goat finally decided to give in. The video was uploaded on YouTube by Lavender 23, and since being shared, it has gained over 4.6 million views from people all over the world. People have left the comments to share their thoughts and their love for the video: “Goat was definitely underleveled for this fight, tactics need a lot of improvement and he needs to invest some skill points in attack. Probably a new player.” Another commented, “It’s cool seeing the goat try to play using his goat etiquette, which any other goat would understand, but this cat is just like ‘what is this thing doing in my house and why does it keep bouncing like that’ lol.” Watch the hilarious video below:

We hope that the cat and the baby goat will grow up to be best buddies. If you love this video, please share it with your friends and family members!

Woman Asks If She’s Overreacting While Yelling At Neighbor’s Kid To Get Away From Her Dogs, Redditors Support Her

Kenya: Tourists Were Left In Awe While 30 Giraffes As A Herd Crossed Their Road

Woman Doesn’t Leave 55-Pound Dog In Wild, Hoists It On Her Shoulders For 6 Hours To Save It