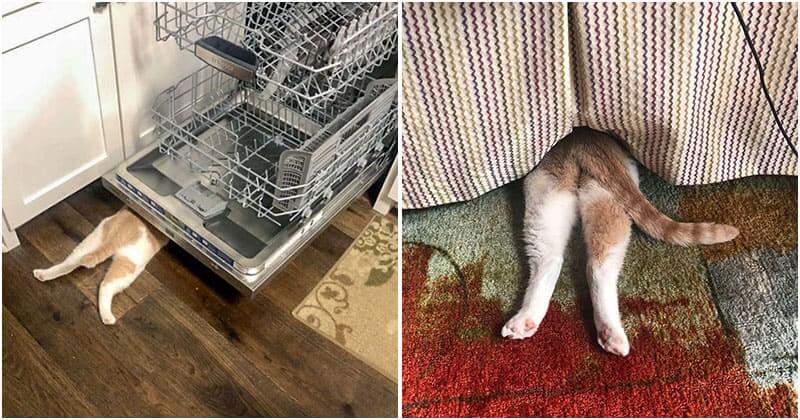 Keanu the cat was rescued from an industrial warehouse when he was just a kitten. His mom works at the warehouse, so she was able to save him just in time. The kitten was shy and scared of people at first, but he quickly came out of his shell, and now he becomes the friendliest and sweetest cat. “He is cautious for the first five seconds he meets someone, then he is instantly their best friend,” Dani Baker, Keanu’s mom, told The Dodo. “When he’s not hiding, Keanu likes finding lizards and leaving them (alive and physically unharmed) in his dad’s shoes, gym bag, work bag, etc.” Keanu is an outside cat, but he loves to hide wherever he can find. He likes to observe things in peace and always thinks that he’s a master of hiding. But in fact, he is not good at hiding and his skills still need to improve. “[He hides in] different spots,” Baker said. “He gets creative depending on the furniture around. But it’s always in the room where his dad is. We joke that Keanu is always spying or keeping a watchful eye on his dad.” Although his family can see him most of the time, he still thinks he’s totally hidden every time. “[He thinks] we absolutely can not see him,” Baker said. “We call to him (and he normally meows back) but when he’s hiding he doesn’t respond. Even if we tap his feet to let him know we see him, he won’t move.” If you love Keanu and his hiding skills, please share his story with your friends and family members!

Your Life Will Never Be Boring If You Own A Pet, Proving Through 22 Hysterical Pics

Spectacular Multi-Colored Plumage And Unique Shape, The Mandarin Duck Is Rocking The World Of Birds