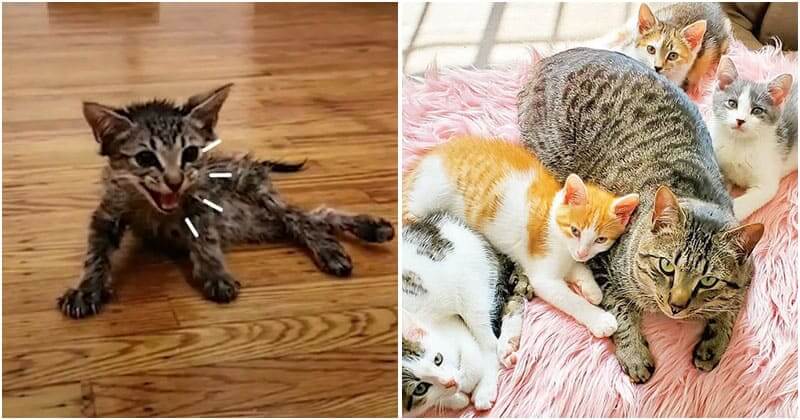 On one night in late January last year, Marie received a small laundry basket that contained a tiny kitten inside. He covered in his own urine and feces, and crawling with fleas. The tiny kitten was paralyzed and was just under 2 pounds. He was terrified, so Marie picked him up, held him to her, and named him Charlie. Marie had never taken care of a paralyzed kitten before, so she didn’t really know what his future would be. Although Charlie was in a lot of pain and couldn’t use his back legs, he was very bright and active. After a visit to the vet, they recommended Marie to put him down. But in that moment, she refused to do that as she knew euthanasia wasn’t the right choice for him. She took him to an emergency department, where the surgeons agreed to save him. Unfortunately, his surgery cost was $10.000 -12.000, so Marie started a GoFundMe page and started sharing Charlie’s story. Within 24 hours, she raised more than enough money for his surgery. A couple days later, he had his surgery. Marie was happy to see his big changes. He could walk again on his own legs and could go around to discover everything. He was so motivated. Since having Charlie, Marie took on many kittens who needed care and love. Charlie used to be a paralyzed kitten, but now he can walk on his own legs and becomes a foster dad. He is now a huge source of inspiration and motivation for other special needs kittens. “Without Charlie, I don’t think that I would have had the guts to follow my dream of animal rescue. I am so thankful that I was able to take him on,” Marie said.

Watch the video of Charlie here:

Let’s take a moment to thank Marie and the people who donated for the surgery. If you love Charlie, you can keep up with him on Instagram. What do you think about this post? Tell us your thoughts in the comments below! Don’t forget to share this post with your friends and family members!

Twitter Thread: 36 Creative But Bizarre Names People Give Their Cats And Dogs

10+ Cats Who Use Dogs As Pillows

Man Spots Incredible Beetle He Couldn’t Quite Believe It Exists