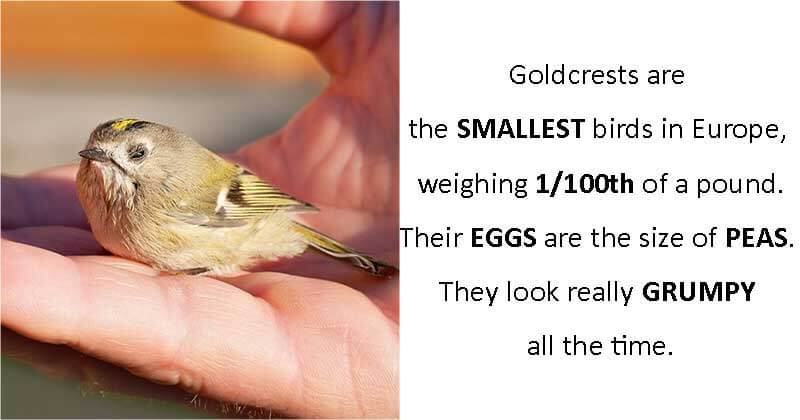 Learning something that is educational yet interesting is always great. It’s much easier for learners to pick up. It does happen with animal facts. It not only broadens our understanding of animals around us but also helps us discover fun, amazing facts. A Reddit community named “Awwducational” was created for these purposes. It aims to provide animal lovers with the most amusing facts about animals.

And, we’ve rounded up 30 interesting facts about animals in this post. They work with both kids and adults. Surely. Even though they are lesser-known, they can make people say “aww” while scrolling down. They’re informative and fun. As there is no limit in nature, why don’t we give these a look? Here we go!

1. Did you know that goldcrests are the smallest birds in Europe? They weigh only 1/100th of a pound and their eggs are the size of peas. These guys also look really grumpy all the time. 2. There is one thing interesting that mom bats speak “baby talk” to their pups. They communicate with the pups to transmit the “vocal signature” of their social group. 3. Crocodilians are actually more closely related to birds than they are to lizards and snakes. Like birds, crocodilians have a gizzard and a four-chambered heart, care for their offspring, and lay hard, mineralized eggs. 4. Prairie dogs are the sweetest pets. These furry guys greet one another by kissing or nuzzling. 5. Wild giant pandas tend to have higher sex drive and have been seen having sex 40 times in a few hours. 7. Platypus closes its eyes and ears while under water. In order to navigate, it relies on its soft, leathery bill to sense other animals & food. 8. Have you ever been curious about the role of stripes on zebras? They protect them from biting flies by confusing the flies, causing them to abort their landings. 9. When rescued, abandoned baby bats will be wrapped snugly in blankets to make them feel like in the warm embrace of their mother’s wings. 10. The mouflon is thought to be one of two original ancestors of all modern day sheep. 11. Tardigrades can survive in many extreme conditions by going into an almost death-like state called cryptobiosis. These guys retract their head and legs, curling into a dehydrated ball, called a tun. If reintroduced to water, the tardigrade can come back to life in just a few hours. 12. The Andean mountain cat is endemic to the Andes mountains. These small wild cats weigh less than 6kg. Less than 2500 are thought to exist in the wilds and they’ve been marked as an endangered species on the IUCN Red List. 13. Red pandas were born with tough molars that are specialized for chewing bamboo. These adorable furry guys can eat about 20,000 bamboo leaves in one day. 14. Male brazilian white bellbirds are the loudest birds in the world. Their mating call which beats chainsaws and rock concerts will cause you hearing damage if you are nearby when they sing. Koko The gorilla, Famous For Sign-Language And Adopting Kittens