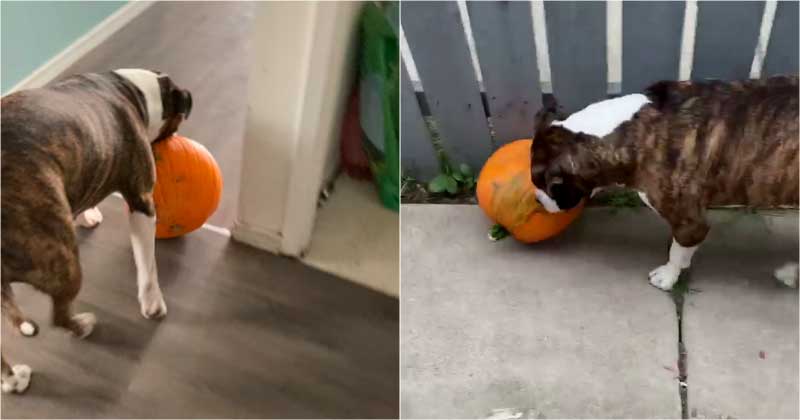 Many dogs are living with their own logic. That’s why they make weird gestures and actions but do not find anything wrong with them. And all of these turn out hilarious, bringing fun to his family. The pit bull in this story experiences the same. The sneaky girl is obsessed with stealing the pumpkin of her mom. She thinks it is a toy ball. Scroll down! Lilly is the name of the pit bull. Her sibling, Max is also obsessed with the large pumpkin that their mom, Alison Lewis bought at the grocery store. The orange squash that was supposed to cook soup, turn out to amaze two furry guys, especially Lilly. When Lilly and Max ran to greet their mother, their eyes stuck to the pumpkin. The two found it an awesome toy as they had never seen it before. Lewis took out her phone to note the adorable gang but when she turned her back, Lilly had stolen the pumpkin. The sneaky girl was caught red-pawed, but she refused to give the pumpkin back to her mom. That wasn’t all. Lilly tossed the pumpkin down the stairs to hide it. Luckily, the pumpkin didn’t smash and Lilly kept playing with it happily. Lewis said: “She thought it was a ball,”. “She was running all around with it, licking it, and she was convinced it was hers.” She continued. You can watch the video of Lilly playing with the pumpkin here.

Lilly enjoyed rolling the pumpkin around the yard, wagging her tail until her mother snatched it back. The pumpkin was brought to the kitchen for the soup. Don’t be sad, Lilly, you would get one at Halloween. Lilly’s reaction to the pumpkin is absolutely adorable? It just looks like the ball due to its vivid color. Let’s share it with your family and have fun together!

Being Verbally Pranked With Kitten Noises, Dog Gives His Owner The Entire Silence As A Punishment