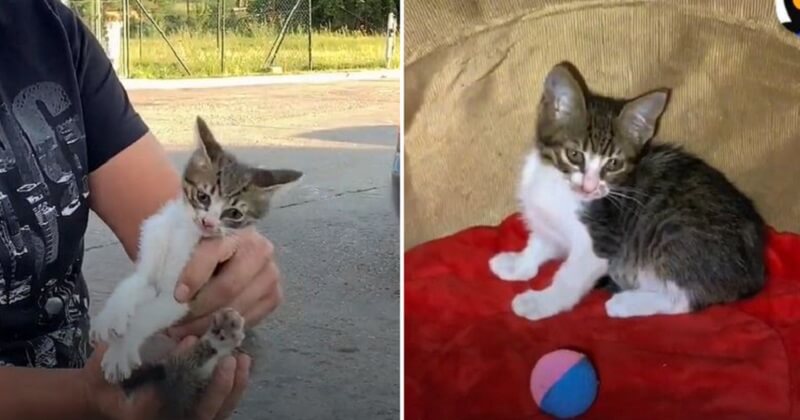 Milan is an animal lover and an animal rescuer in Serbia. He runs a dog rescue shelter called Mladenovac. The shelter was established in 2007, and it is one of few Serbia’s largest non-profit, no-kill animal shelters. Milan understands that life on the streets is very hard and risky, so he wants to help animals from the streets who really need safe places in the shelters. “We have placed over 1000 dogs and cats, since we opened our doors. We are located just one hour south of Belgrade and easily accessible to all of Serbia. Being open 7 days a week makes the adoption of a pet convenient for the general public and enables us to place all homeless dogs and cats who urgently need help,” the shelter wrote on Facebook. Every day, Milan finds animals who’ve been left behind. He saves them, brings them to his sanctuary, and finds forever homes for them where they will be loved and cared forever. Felix is one of the kittens he saved from streets. At first, the kitten was timid and scared. He even bit Milan when he tried to rescue and touch him. But Felix slowly trusted Milan, and he is now doing so well. Thankfully, after two weeks in Milan’s sanctuary, he found a forever home with a loving dad that he deserves.

Watch the video below to see the full rescue:

You can help Dog Rescue Shelter Mladenovac save animals in need by donating. You also follow them on Youtube or Facebook to update their newest rescues.

Love this story? Please share it with your friends and family members!