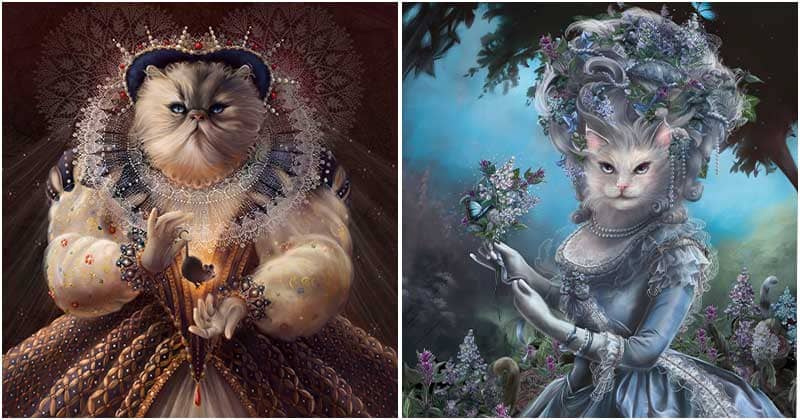 Christina Hess is an illustrator from south Philadelphia. In addition to freelance, she is a member of the United States Mint’s Artist Infusion Program. She is also the Illustration Chair at Pennsylvania College of Art and Design.

“I didn’t want to be that illustrator that painted animals in clothes. But after I completed Queen Elhissabeth for a family friend I realized that I could have fun with this idea. A lot of fun. Using numerous pets and celebrity animals from charities like Big Cat Rescue for inspiration I started recreating historical icons as animals. Some paintings are created traditionally in oils like William Shakesbeard and others are digital like Queen Elhissabeth. It just depended on how I wanted to work at the time. I launched the idea on Kickstarter and it was funded by 123 backers,” Christina wrote on Bored Panda.

She is featured in “Women of Wonder” and exhibited in the “Point of Vision” show at the Society of Illustrators, NY. You can also find her work at Ian Russell Gallery in Prescott, AZ. “I sell prints and mini booklets in my Etsy shop as well as on my website. My original paintings can be found at Ian Russell Gallery of Fine Art in Prescott Arizona.”

“Now I am continuing the series and planning on adding many more characters on the wild side. Mary Shelly, Bessie Coleman, Bass Reeves, Billy the Kid and Nikola Tesla are only a few of the new personalities on the roster. I’ve got foxes, pit bulls, skunks and rabbits in my mind for the future.” “Meet Marie Antoinippe. Strolling in her catnip garden she’s ready to hang on your wall to remind you that every cat should be treated like a princess.” “The image that launched a thousand paintings….okay, maybe not a thousand. Created in Painter and Photoshop I used numerous classical portraits of Queen Elizabeth as reference. A cat named Lady was my inspiration.” “I always loved the Anne of Cleves portrait by Holbein. She hides fish up her sleeves for late night snacks. I used a combo of cool cat images for this one. Digital.” “I only eat tofu mice, fool.” You know that person. You know the one. “I’m only a Mac person” person. Well if they appreciate wild cats and/or the last cat named OS that Jobs put out then they might like this as a gift for their new pristine yet totally laid back Mac lair. Meet M.L. Jobs. Attitude. Pure attitude.” “16×20 mixed media…oils, collage and gold leaf. I love the rollercoaster love story of the Fitzgeralds and used the two snow leopards, Anna and Evert, at the San Diego zoo as inspiration.” “Oil on board. There are so many opportunities to rename his plays! The beautiful Mr. Phox was the inspiration for this image.” “Cleo and her snake, Aspy. This was a conglomeration of references with no particular model in mind. Mixed media on board.” “A Manly leader and lover of nature. The model was Seymour who really did look like Teddy Roosevelt! Oils on board.” “The king needed to be a wild cat. Inspired by Rufus from Big Cat Rescue. Digital.” “The koala was a toy the model, Fenris, use to run around with. My client wanted a enlightened personality to catch the cat’s spirit. Oil on board.” “Painted in oils and silver leaf on 11×14 board. This is a feline spin on the double agent Mata Hari. Many awesome photos taken by Big Cat Rescue were used as inspiration. All the detail is like therapy for me.”

Studies Says That Only 1% Of People Can Find The Animal In This Picture, Can You?

10+ Dogs Who Steal Their Owner’s Heart With Caring Actions