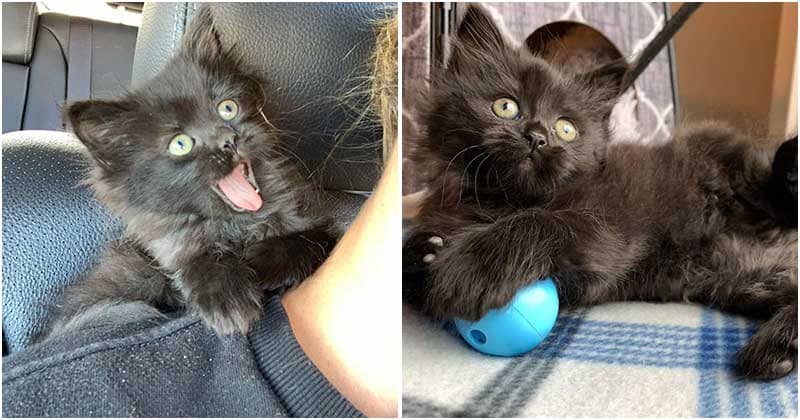 Black cats often face difficulty in finding forever homes because there’s a superstition related to them. Many people believe that they’re bad luck and often bring the unhappy and the unlucky. These poor animals already have it hard when it comes to finding good owners, but life doesn’t let them live in peace and keeps throwing more challenges at them. A man was driving when he saw a tiny kitten trying to cross a busy road with a lot of traffic. He immediately stopped his car, grabbed her, and took her home. “She ran under his car, so he stopped, grabbed her and rushed home.” He shared a post about the kitten on social media with the hope that someone would give her a second chance at life. Thankfully, Holly Brookhouser, an animal rescuer and foster based in Arkansas, came across the post from a local Facebook group. She immediately stepped in and decided to foster the kitten. That day happened to be the second year home anniversary for Holly’s adopted son, Marcelo, which made it doubly special. “I figured we’d commemorate this day by saving this baby!” “I saw the post about the kitten and knew it could end up in the wrong hands, so I decided to jump back into fostering and on the day we were celebrating Marcelo’s second year home with us, I thought, no better way to commemorate the day than to save the life of this kitten,” Brookhouser told Bored Panda. They quickly took the kitten to the vet and prepared a new home for her. The little fluffball curled up on her shoulder and slept though the drive home. Marcelo was so happy and decided to give her the cutest name – Appleseed. “Marcelo was so happy to get to name the baby and thought real hard for a great name, and joyfully declared Appleseed! He knows Appleseed is just a foster and that she will eventually need a good home. So in the meantime, he’s helping me acclimate her to home life filled with good food and lots of love.” We are happy to know that Appleseed is getting used to her new home and her adventurous personality is starting to blossom. After everything happened in the past, now she has a great future ahead when she finally finds a forever home with wonderful owners who will love and care for her. Love this story? Tell us your thoughts in the comments below and don’t forget to share this post with your friends and family members!

Don’t Look At These Cute Baby Beavers, They Will Steal Your Heart