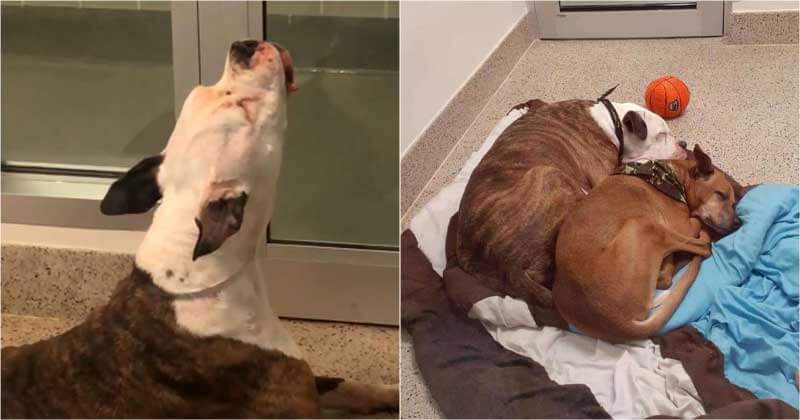 Not only do humans create a true friendship but animals also build a strong bond with their friends. They are the greatest companions for each other. One day if they are separated for some reasons, this will hurt both. The story of shelter dog Schwabo below will break the heart of millions. He has cried for days in his kennel after separated from his best friend.

This is what happens at Miami Dade animal services. A dog named Schwabo cried for days in his kennel because of missing his family, and most importantly, his best friend Rocky. The lonely howls of Schwabo tightened the heart of shelter volunteer Jani Bradford, who watched him stare out the glass divider searching for his friend.

Schwabo is 9 years old and Rocky is 11 years old. The two had lived together until their owner surrendered them due to landlord issues. Living without Rocky alongside seemed to devastate Schwabo. He refused to eat and kept calling for his best friends from his kennel.

“He grew up looking up to Rocky and now, even though he’s older, Rocky is like his big brother,” Bradford said. “He’s very, very attached to Rocky.”

When Schwabo and Rocky first arrived at the shelter, Rocky was placed on the adoption floor while Shwabo, who was limping due to arthritis, was sent to the back for observation. Rocky quickly received an application, but the potential adopter never showed up, so the two dogs were reunited. And, Schwabo was happy with this. He found his true companion. “Schwabo was a different dog from the moment he saw Rocky,” Bradford said.

The two built a strong bond. “Rocky’s older but he acts like a puppy. He loves playing with the ball, he can play all day long,” Bradford said. “Schwabo acts a little older … He’s very calm, very low maintenance.” While Rocky prefers a more active lifestyle, Schwabo just wants to hang out and watch his best friend play.

“Schwabo doesn’t do much — he lays in his bed and loves watching Rocky doing all his goofy stuff,” Bradford said. “Schwabo needs Rocky. He just loves being around him, watching him play all day. Rocky makes him happy.”

Thankfully, the two friends will never need to worry about being separated again. Doghouse Rescue Academy spotted one of Bradford’s Facebook posts about Schwabo and Rocky and decided to help find them a home — together.

And now that the pair find a new home, they are all smiles.

15 Hilarious Cats Who Behave Exactly Like Us at Work