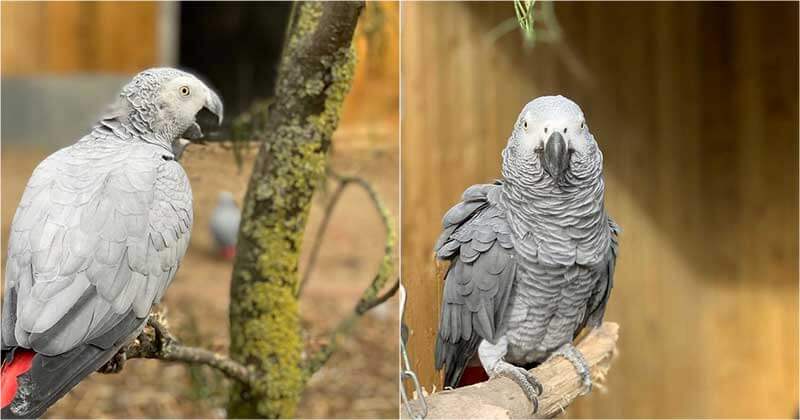 Parrots are smart and mischievous animals that are known for their ability to speak and mimic voices. This is also what makes them adorable pets but can also get them in trouble if they learn the wrong words. And this happens with Five African grey parrots adopted by the Lincolnshire Wildlife Park. They have recently been removed from public view and separated after starting swearing at customers. These parrots taught each other to swear during the quarantine. Luckily, everyone saw it a hilarious situation and nobody was offended.

The Lincolnshire Wildlife Park adopted 5 parrots namely Billy, Elsie, Eric, Jade, and Tyson in mid-August. However, these newcomers began encouraging the others to curse like sailors while in quarantine together. And this ends up with bad language at customers.

According to Steve Nichols, the CEO of Lincolnshire Wildlife Park, the parrots are doing very well after being separated and fit in very quickly as highly social creatures. These five African grey parrots began swearing at customers, so they were separated and removed from public view. Luckily, nobody felt offended.

Nichols confirmed to Bored Panda that the swearwords the parrots uttered were “very strong”. He added that he’s yet to meet someone who doesn’t regret teaching their parrots to swear. Nichols said that it isn’t difficult to make parrots forget certain words or phrases: “They will eventually be integrated into a flock of over 200 African greys and hopefully they will have way too much on their minds.”

The staff had hoped that being outside would help the parrots learn to mind their words. Whenever they got a response from someone, this just encouraged them to keep swearing. “We saw it very quickly—we are quite used to parrots swearing but we’ve never had five at the same time. Most parrots clam up outside, but for some reason, these five relish it,” the Nichols told PA.

Now, these parrots are separated and placed in different areas of the zoo so they don’t encourage each other to swear. Even though nobody complained about the mouthy birds, their separation is essential. This helps protect young visitors and hope that the parrots would pick up the natural calls of other African greys.

“People have come to us but they think it’s highly amusing, we haven’t had one complaint. When a parrot tells you to [eff] off, it amuses people very highly. It’s brought a big smile to a really hard year,” Nichols said. The five African grey parrots aren’t the renowned birds at the Lincolnshire Wildlife Park. The zoo also has Chico, a parrot who made headlines earlier in September after learning to sing pop songs, including Beyoncé’s 2008 single, ‘If I Were A Boy.’

The Lincolnshire Wildlife Park spreads over 650k square feet of Nature Reserve and is the United Kingdom’s premier Animal Rehabilitation Center. It has over 2k residents and is home to The National Parrot Sanctuary which is the largest of its kind in the world. The park has rescued more parrots than anyone in the United Kingdom.

Dog Finds Her Twin On The Street, Begs Mom To Bring Him Home