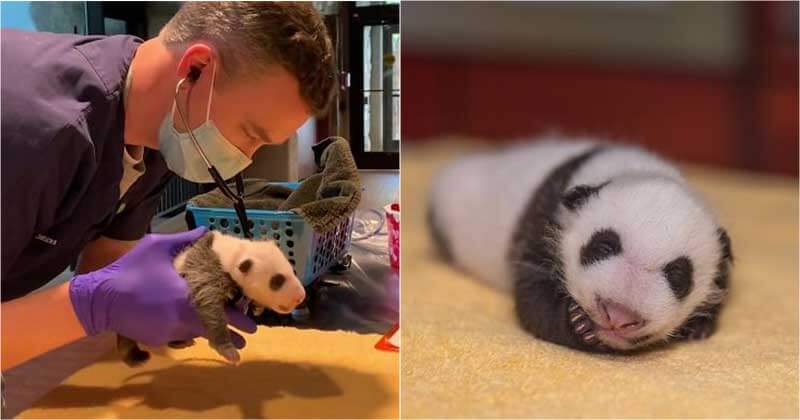 Pandas are adorable creatures. Even when they’re grown up, these furry friends still keep their born cuteness – giants with a baby soul. It’s easy to understand why panda cubs can make humans around them fall in love with them. They have charisma, and all of their gestures and actions can melt our hearts. If you have chances to meet these adorable guys in real life, you will find that they’re absolutely friendly and gentle. Recently, the Smithsonian’s National Zoo & Conservation Biology Institute has released a video of their little 1-month-old panda cub when it was getting the very first veterinary exam. The video was later shared on their official Twitter account and went viral. It currently has over 2.6K likes and more than 500 retweets. The panda cub was born on August 21. Its mother is a giant 22-year-old panda named Mei Xiang. The video was filmed by the zoo staff when the baby panda was having its first veterinary exam. The little cub is strong and healthy! “As of this morning, the cub weighed 1,337 grams, or just under three pounds. From nose to tail tip, it measured 35.5 centimeters, or 13.9 inches (its tail accounts for two of those inches),” announced the zoo right after the examination.

Mei Xiang was artificially inseminated using frozen semen. Thankfully, the 22-year-old panda mother experienced a successful pregnancy and birth. She is now the oldest giant panda in the United States and the second oldest documented in the world to ever give birth. The little baby panda currently only eats its mom’s milk for all of its nutritional needs. When it’s around a year old, it will consume bamboo and other solid foods.
Regarding the sex of this little cub, the zoo still doesn’t know if it is a boy or a girl. Its DNA is currently being analyzed and the result will have after a week or two. “Our Center for Conservation Genomics is analyzing the cub’s DNA, and we should know definitively in a week or two whether it is a male or female. Stay tuned for that exciting development!” the zoo explained. If you love this story, feel free to share it to your friends! Enjoy!

10+ Animals That Deserve To Be Called A Hero