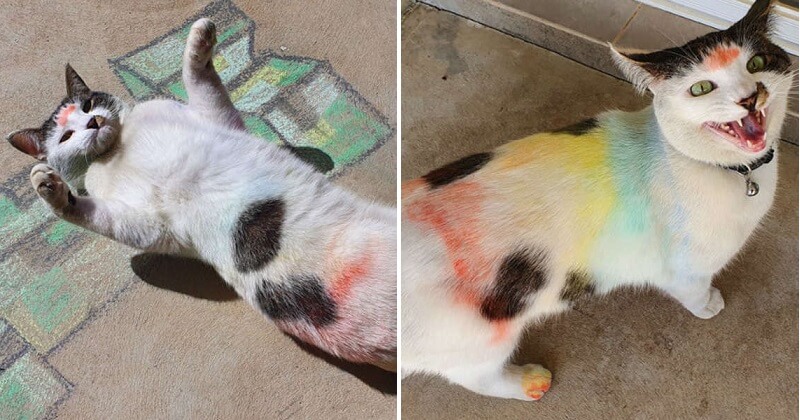 Tage and Tali are two adorable cats who have always loved rolling around on the back patio whenever their family is hanging out outside. When they are not allowed to go out for whatever reason, they are definitely disappointed and upset. Recently, the family decided to cover their back patio in chalk drawings. They kept Tage and Tali inside as they worked, even though the two desperately wanted to join in the fun.

After several hours of drawing, the chalk masterpieces were completed and all of family members were very proud of their work. They let the cats out once they were done — and the two immediately decided to make the chalk drawings greater.

“They were crying at the screen while we chalked the patio, so when we were done we let them out,” Rodger Sherman told The Dodo. “They were covered almost immediately.”

When seeing the chalk drawings, the two cats instantly began rolling all over them, smudging them and covering themselves with bright colors. The family couldn’t stop laughing at their rainbow-colored cats happily rolling and rubbing themselves all over their drawings.

Although most of the drawings didn’t stay intact, no one minded. It was clear that the cats didn’t want to destroy the chalk drawings, they were just trying to make some small improvements to the art.

After being completely covered in chalk, the pair realized there was something a little different about themselves.

“Tage was entirely unfazed but Tali was confused a bit and realized her mistake pretty quick,” Sherman said.

Tali wasn’t happy that her fur was suddenly all different colors, but the family couldn’t stop laughing. The chalk, of course, came off quite easily — but the cats will probably get covered again the next time they go out on the patio.

What do you think about this post? Tell us your thoughts in the comments below! Don’t forget to share this post with your friends and family members!