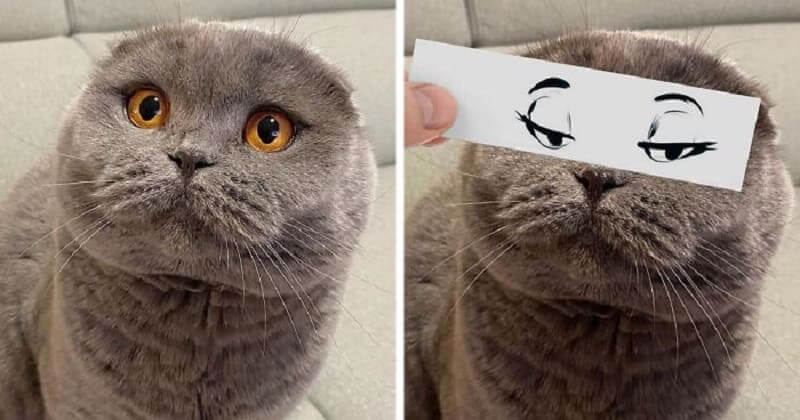 Meet Atlas the adorable Scottish fold, and CleoCatra, the Scottish longhair who have special and funny photos that are going viral on the internet.

Their owner Adrian took some adorable photos of them and decided to spice up them to make them even funnier. He used a piece of paper that has a portion of a facial expression and put it over his cats to give them random emotions. And the results are absolutely hilarious! In an interview with Bored Panda, Adrian said, “I’m always looking for ideas for creating creative posts and came across an image online with a white face mask with different facial expressions on it,” explained Adrian on the inspiration behind the photos. “This gave me the idea to do the white strip facial expressions focusing on the mouth and eyes as these are the most expressive parts of the face.” 3. Just had my teefies cleaned. “Atlas is a joy to have around the house. She’s very quirky and loves to lay on her back with her paws up in the air. She loves to follow me around the house and is always curious and needs to know what I’m getting up to. She enjoys a good pat and kitty massage followed by a long cat nap.”

4. It’s face now resembles that of a seal He continued: “CleoCatra is actually Atlas’s biological sister but from a different litter. Their mother is a Scottish Fold and father a British Shorthair—which is the ethical way Scottish Folds should be bred, hence why Atlas has folded years and CC doesn’t. Atlas looks like her father, but inherited her mother’ss folded ears and CC looks like her mother, but inherited her father\ss straight ears. CC is the typical little sister and loves to follow Atlas around. Atlas loves her little sister and you will often find them cuddling together.”

6. Why have you taken my ears Hooman? “CC is very much a lap cat and loves human attention and she is so loving and smoochy. She is full of curiosity and you’ll often find the two of them following you around the house or waiting at the shower door. They both enjoy a good pat and human attention. CC is a little cheekier and will often wait around the corner for her big sister ready to pounce.” “It’s sometimes hard to get a cat to pose the way you want it to for a photo, so I always make sure I have my phone/camera at hand. There is, however, trickery behind the facial expression images of Atlas and CleoCatra,” explained Adrian. “The snippets of card and hand have been photoshopped in after I took the picture as it would be too difficult to match the same pose with different mouths and eyes each time. The eyes and mouths are modified from online clip art to suit the facial expressions. It was just a matter of working out which expressions worked best.” People from around the world love these cute cats and their pics, so they wish there were more expressions.

“The facial expressions were a hit, but I try not to repeat the same theme over and over again. I’m always coming up with fun and creative content so stay tuned to see what we do next,” he said. 13. You’re in some serious doodoo, mister! 15. Cat “yeah, getting a little bit tiresome now, let me just stare out the window at nothing like normal” 19. Mama Mia here we go again meeeow meow how can we reeeeesssist ya? If you love Atlas and CleoCatra, please follow them on their Instagram. But before you go, let us know your thoughts on these pics in the comment section below! Be sure to share these hilarious and cute photos with your friends and family members!

20 Cute Puppies And Their “Huge Wolf” Look When Grown Up