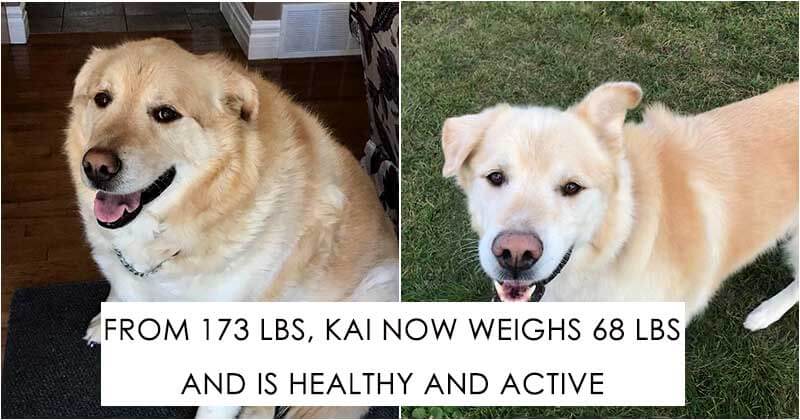 Dogs love food. No one denies this. But if you feed your dogs too much, it may cause them overweight and even obese. Then they do not look cool and stay healthy anymore. Your love and care in the wrong way may harm your dog. No owner wants their dogs to be this, right? Your dogs may show off adorable behaviors when asking for food. Don’t let these persuade (divert) you.

This golden retriever is an example. Kai was severely overfed by his previous owners. He weighs up to 173 lbs, which is way more than a golden retriever should weigh—about 100 pounds more. As the result, he couldn’t move normally, let alone do simple tasks every dog should be able to do, like run and play. This led Kai’s old owners to put him down, but the vet refused and took him into the shelter instead. But Kai is such a lucky boy. He was adopted by a kind-hearted woman who changed his life for the better.

This pic of Kai is when he weighed 173 lbs “He was a rescue surrendered to Misfits of Alberta Animal Rescue. Misfits is a small local animal rescue that is based solely on fostering. At first, I fostered Kai, but on December 26, 2018, he officially joined our family. He was taken in to be put down by his previous owners due to obesity. He was 173 lbs when he was taken in, and his mobility was very limited. He now weighs 68 lbs and is healthy and active,” Kai’s owner, Pam Heggie spoke to Bored Panda. “When I first met Kai, I honestly could not believe his size. He weighed 173 pounds (78.6 kg). He struggled to do everything and panted all the time. We often had to lift him using a big soaker pad to get him up the stairs. Getting him in and out of the car was so hard. Always took two of us and I took a seat out of the van so he could fit easily.

Eventually, he got to where he could use a ramp and that gave us so much more freedom. I honestly was scared I would wake up and he would just be dead in his sleep. From the beginning, he seemed to understand we were trying to help. At first, he did water therapy because he limped so bad and I was worried about his joints with all that weight. A vet clinic here had a water treadmill and Kai did therapy there once a week for 6 weeks. It really helped with his stamina. Then we could go to the dog park. We walked every single day. Edmonton, Alberta has very cold winters, but we never missed a day. I started his Facebook page to keep us motivated and accountable. Plus, I thought he was so amazing and that others would enjoy his determination and progress.” The owner shared some of her favorite things about Kai: “My favorite thing about Kai is his laid-back personality. If I could pick the perfect dog for me, it would be Kai’s personality. He is funny, loving, and very easygoing. He just loves to be wherever I am. He’s truly my best friend.” Kai was supposedly 10 when he was surrendered in March 2018, so he is about 12 years old now. Golden retrievers are one of the most popular breeds. They are very tolerant of children, making them the perfect family pet. They are very easy to train and are known for their obedience and loyalty. Retrievers usually weigh from 55 to 75 pounds. So Kai used to be severely overweight. Luckily, Kai found his new parents who decided to help him to regain his health.

Kai’s new owner shared some information about her other pets: “I have two other dogs. Abby is a 4-year-old black lab, and Eddie is a 14-year-old beagle cross rescue I adopted from the SPCA 12 years ago. He had been returned twice and is the naughtiest dog ever. Abby I have had since a pup. She is always at the park with Kai. Kai is more a people dog than other dogs, but he and Abby definitely have a big brother/little sister relationship. They compete for affection and she is who really encouraged him at the off-leash, especially in the beginning. If Abby is by me, Kai has to come to get closer and push his way in. She’s a more nervous dog than Kai, and if she is scared at the park, he’s there to be sure she is safe. He sleeps by the bed and every morning jumps up to cuddle once my husband goes to work.” “Our vet was very helpful for Kai. He recommended a prescription weight-loss food and that is what we fed. He was fed to his desired weight of 75 pounds. He actually weighs 68 pounds now and has maintained that weight for over a year now. Fruits and veggies are the only other snacks he gets. Kai did hydrotherapy and daily walks to lose weight. Just like people. At first, we did short walks (literally 5-10 steps) three times a day. As his stamina improved, we went longer and less often. Now we walk 30-60 minutes every day. Sometimes he plays with a ball, but he’s not much of a toy guy. When he was heavy, he loved the water. I think he was just so hot and his joints so sore, the water was easier. Now he likes water, but not like he used to,” Pam shared.

“Kai’s favorite things to do are: go to the dog park and on road trips with me. He loves car rides and just being wherever I am. We have flown to New York City twice, he has been all over our home province of Alberta. He’s also been to two other provinces and a few other states in the USA.”

Then Kai involves in his weight loss program He walked in water baths and, step by step, lost his excess weight After losing 100 pounds, Kai became a certified therapy dog and started doing hospital visits. He still has a lot of love to give to people, even after he was mistreated so badly. Wouldn’t you love to be visited by this amazing doggo when you’re not feeling well? Pam shared how Kai became a therapy dog: “Kai is now a ratified therapy dog. While we frequented the dog park during his weight loss, it was really the people he loved. So I decided to pursue having him become a therapy dog. That took us about 8 months—he had to pass temperament testing, obedience testing, and then do testing for ratification. He was a star. COVID interfered with that, but our plan is to have him at the airport as a therapy dog. We will finish the paperwork for that once COVID allows. Kai loves being a therapy dog and he loves going to the dog park. He is the best travel partner. He loves the car and has flown in a plane and been on a ferry. He loves to travel and we like to go to the national parks and Vancouver to visit family. He is amazing.”

“Kai loves fruits and veggies as his favorite snacks. I don’t feed processed dog treats. Only fruits and veggies (in addition to his dog food). He loves carrots, broccoli, blueberries, strawberries, pumpkin, watermelon, and is absolutely crazy over bananas. I cannot eat a banana without sharing. I never get a whole one to myself. Ever.”

He now weighs 68 lbs and is healthy and active “Kai knows the words ‘park’ and ‘supper.’ He jumps, barks, and gets so excited about his meals. It is next to impossible to get out the door without him. He recognizes my dog park clothes and knows when I get his knee braces out, something really fun is about to happen. At the dog park, he has to run up to greet every person. He’s not as excited about the other dogs, it’s the people he can’t wait to see.” “Kai is an excellent example of the joy that can come from fostering, and in particular fostering a dog with special needs and a senior dog. The people who have reached out to say Kai’s story motivated them has been overwhelming. He has motivated people with overweight dogs, and people who are overweight. Teachers have used his story to encourage inclusion, to exemplify determination and a positive attitude to help achieve big goals. Kai taught me so much about taking an overwhelmingly big goal and just doing it one small step at a time. He was always happy and in turn, makes others happy. I love him a ridiculous amount.” 15 Unique Things That You Can Only Find In A Gemini…Don’t Miss It!