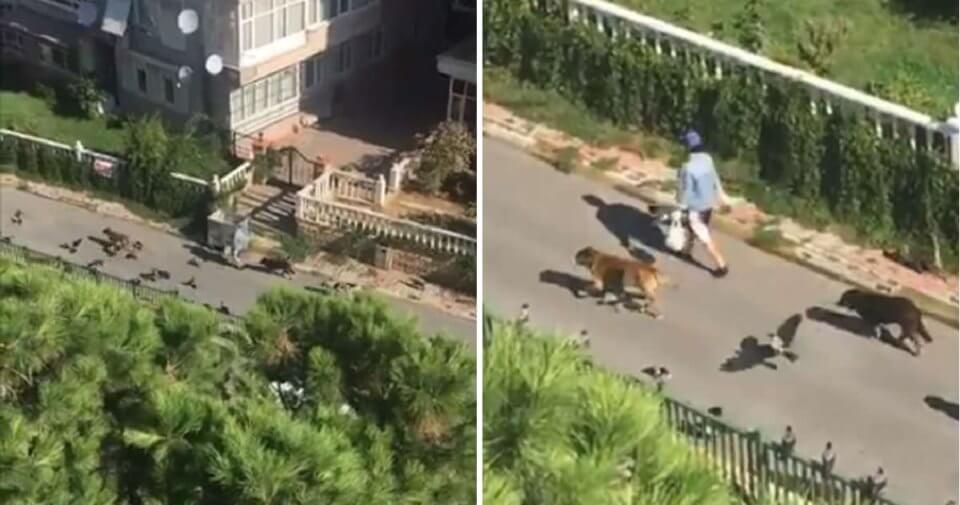 Dilara İlter was staying at her mother’s house in Turkey when she spotted a remarkable scene on the street that stunned her for a moment. She quickly grabbed her phone and captured the amazing moment on the phone. She then shared the video on Twitter, and it went viral immediately.

You can watch the sweet video here:

In the video, a woman could be seen waking on the street. Surrounding her were dozens of animals like dogs, cats, and even birds. They followed the woman down the street, appearing to trust her completely. The 4-legged friends trotted happily at her side, while the little birds flew closely her head. They all eagerly joined her as if in some grand parade.

“The moment I saw her walking like that, I thought she was a wizard or something,” İlter told The Dodo.

However, after speaking with her mother, Dilara realized that the woman was not a wizard, she was just a simple woman – a kind-hearted woman who often gathered stray animals together each and every day to give them food. “My mom told me that every other day [the woman] gathers stray animals around and feeds them,” İlter said.

This was no act of sorcery, it was an act of love. The woman had captured the animals’ love through the power of her caring nature and love.

Touched by the woman’s kindness, Dilara said: “The scene was so poetic,” İlter said. “I was amazed how beautiful what she was doing for these animals.”

Just one year later, on another visit to see her mother, Dilara spotted the woman out again. Once again, the happy animals could be seen following her with complete adoration.

“My mom found her and talked to her but she was too shy to talk,” İlter said, noting that the woman is not alone in her good works. “The streets are full of food left out for animals. It’s pretty common in Turkey actually. Everybody loves stray animals here.”

The woman is reportedly still feeding stray animals who look to her for help and affection to this day. Although her work is hardly thankless, she seems to prefer love and appreciation in the form of full bellies and happy wagging tails.

Love this story? Let us know your thoughts in the comments below! Don’t forget to share this sweet video with your friends and family members to make their day brighter and warmer!

Rare Havana Brown Cats Are Rescued After Being Mistreated For Years

Man Yells At Child For Petting His Dog, Redditors Side With Him And Call The Kid’s Parents Out

“My Mom Is Allergic To Cats, But I Would Still Like To Adopt A Cat”: Woman Turns To Reddit For Advice, And Everyone Sides With Her