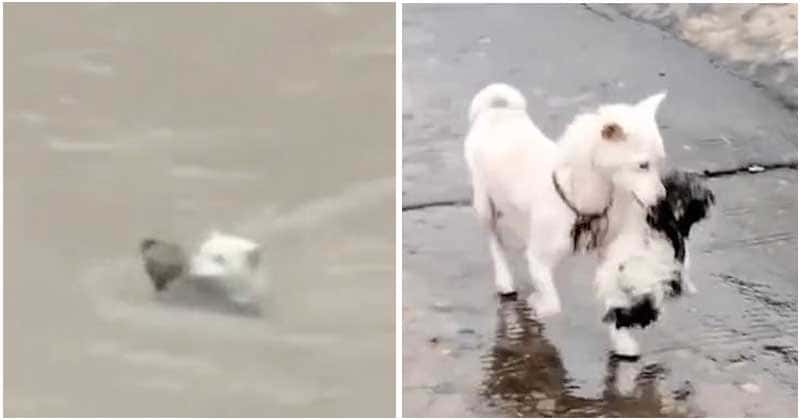 They say there’s nothing more powerful than a mother’s love, and we have one seriously heartwarming video to prove it.

The viral clip captured the touching moment a stray mother dog jumped into a swollen river to save her puppy stranded by surging floodwaters in China’s south-western province Sichuan. The dog and her five puppies were left stranded in the water after their temporary home was swallowed by the rising tides. Local residents gathered and called police for help after seeing the dog family struggling to return to land.

A kind man swam across the floodwaters and managed to save the mama dog and her puppies. But sadly, he just saved four babies because the wide river continued to swell. A police officer stopped him from saving the last baby dog as he thought that it was too dangerous for the man to return to the river. After noticing one baby missing, the brave mother immediately turned around and sprinted back to the overflowing river to fetch the puppy. Despite the dangers, she jumped in and swam as fast as she could to save her baby.

Watch the heartwarming video below:

As you can see in the video, the small dog eagerly swam towards the puppy stuck between tree branches and then carried the baby back with its mouth.

Residents cheered and applauded as the dog managed to get herself and her pup back to land safely. What an amazing Mama! According to Chinese media, all the dogs were adopted by local residents following the event.

The video has quickly viral after it was shared across Chinese social media on Thursday. Everyone has been touched by the mother dog’s brave act, praising it as ‘the power of mother’s love’. ‘This is truly the power of a mother’s love. No matter how dangerous it is, she always wants to protect her children,’ one commenter wrote.

Another one said: ‘A mother’s love is extraordinary, no matter if you are humans or animals! So much respect for the mother dog!’

What do you think about this post? Tell us your thoughts in the comments below! Don’t forget to share this touching video with your friends and family members!

Scorpio – A Cute Volcano Of The Zodiac Signs, Describing In 15 Memes

These 18 Pisces Memes Will Brighten Up Your Day, Watch Till The End!

15 Hilarious Times Of Sagittarius With Their Home And Family

20 Zodiac Memes That Will Amaze You With Their Accuracy

Sum Up Mom’s Life In 25 Comics, Created By French Artist

Capture The Hilarious And Cute Moments Of A Cancer Woman

Dog Lost After A Tornado Neglected Home Reunited With Mom

Adopted From Zoo, Messi The Puma Enjoys Living With His Human Family

Dog And Wild Duck Form The Most Adorable Unlikely Friendship

Young Boy Fights With Vicious Dogs To Protect His Siblings

4 Best Matches For An Sagittarius

Aggressiveness – Sign To Identify An Aries, Proving In 16 Hilarious Memes