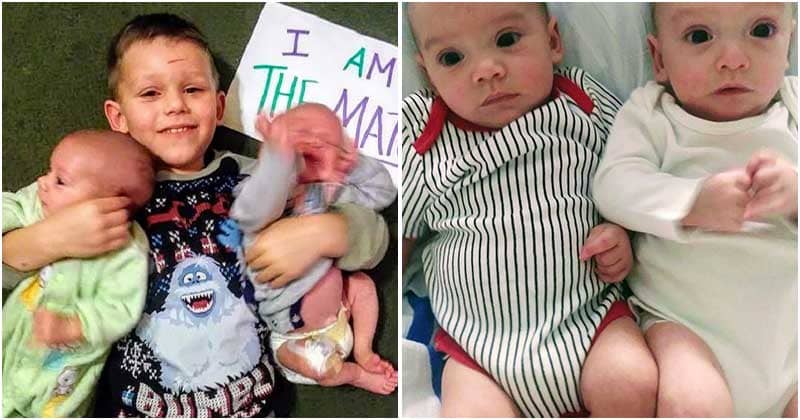 Meet Michael Pownall, a 6-year-old superhero who donated bone marrow to save his twin baby brothers when he was just 4 years old.

Michael’s twin brothers, Santino and Giovanni, were born with chronic granulomatous – a rare immunodeficiency disease which is diagnosed in one in 500,000 people every year. According to the National Institutes of Health, this disease causes the immune system to malfunction, leaving patients unable to fight infections. The two boys can be life threatening if they are not transplanted bone marrow. “My fiancé and I have two older boys, Dominick, 9, and Michael, 4. We found out last spring we were expecting not one, but two babies in December. We were excited but nervous as our family was growing. The twin boys, Santino and Giovanni, were born prematurely on October 14, 2017, at 33 weeks gestation and spent give weeks in the NICU,” Michael’s mom, Robin Pownall told Love What Matters in an interview in 2018.

“We were then sent home and spent 10 days home until Santino and Giovanni both tested positive for Chronic Granulomatous Disease (CGD), a rare immune disorder that affects part of your immune system and makes them unable to fight certain infections on their own. Santino was hospitalized for a wound infection, and we have been at Children’s Hospital of Philadelphia (CHOP) ever since. We realized the only way to live a normal, healthy life was through transplant.” “Our oldest son, Dominick, who is now 9 years old, had Chronic Granulomatous Disease as well and is now considered cured from a stem cell transplant he received here at CHOP eight years ago. Our middle child, Michael, who is only 4, has matched with both twin brothers as being the perfect sibling match for a bone marrow transplant.”

Michael didn’t hesitate when his mom asked him if he wanted to help his little brothers. When he found out he was a match, he eagerly wanted to donate his marrow to help them. “We told Michael he was the match and asked him if he would help us save his brothers lives. We [put] a lot of thought into it, especially ethically. How much did he understand at 4 years old? But we told him. We said, ‘There is going to be a big needle going in your back and they’re going take your blood from your hip and they are going to take your bone marrow out.

Michael said, ‘I’m gonna give them with my bone marrow!’ I explained the entire process with him, how it may hurt, and that he will be getting a pretty large needle. He said, ‘Is it going to save them?’ We said ‘yes’ and he said, ‘Okay, I’ll do it then!” Michael was scared initially as anyone would be, but his courage is far more than one of a 4-year-old! When asked why he wanted to do the transplant, he told that it was because “I’m a superhero!”

“He’ll randomly go up to them and kiss them on their forehead and say, ‘I love you baby,'” Pownall said. “He’s very protective of them.”

“Michael is proud to be saving his twin brothers lives. He is so brave, he leaves his arm out for the nurse to draw his blood. He knows what he’s about to do. It’s truly inspirational. He gives me strength just watching how strong he is.” “I am so scared and nervous for all three of my boys, but when I look into their eyes, I see strength. I know everything is going to be okay.”

The twins underwent chemotherapy and received their transplant from their superhero brother Michael on March 8, 2018. Now, we are glad to know that they are living happily with their beloved family!

Love this touching story? Tell us your thoughts in the comments below! Be sure to share this story with your friends and family members!

10+ Memes Only People Who Love Zodiac Signs Will Understand

How Do Zodiac Signs Treat Their Exes? These 15 Memes Will Answer It

What Sagittarius Are Like When They Go To Work, Describing 15 Funny Memes

Never Force Or Challenge A Sagittarius, Describing In These Surprising Memes

Here Are What Truley Makes A Libra Overjoyed

Discover Internet Habits Of A Libra Through 15 Hilarious Memes

15 Memes That Describe Sagittarius Is The King Of Brutal Honesty