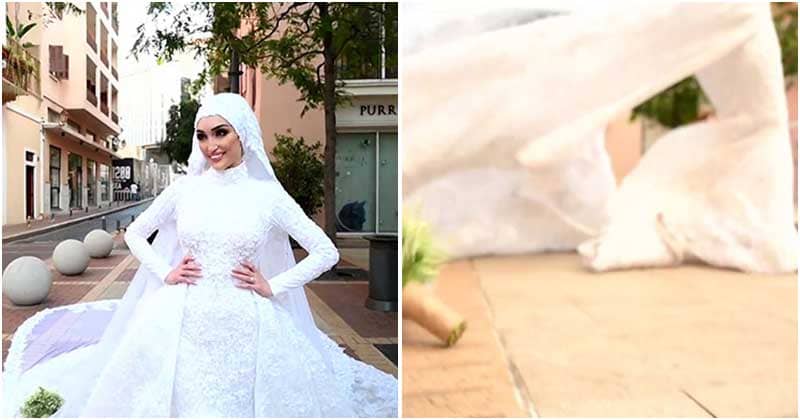 Last Tuesday, a photographer named Mahmoud Nakib was filming a wedding video in Beirut when he captured the moment the explosion went off in the city. He shared the footage of the explosion on his social media and it quickly went viral.

You can watch the video here:

A young woman is seen in the video, smiling in her white wedding dress as she poses for her professional shoot. She was so happy because it was supposed to be the luckiest day of her life.

“I have been preparing for my big day for two weeks and I was so happy like all other girls, ‘I am getting married’. My parents are going to be happy seeing me in a white dress, I will be looking like a princess,” the 29-year-old Lebanese bride Israa Seblan told Reuters. However, the smile on her beautiful face is soon swept away by the deafening shockwave, which suddenly stirs up her wedding dress, and knocks down the camera. The square where the wedding photoshoot was taking placewas close to the epicentre of the explosion. It was just around 0.75 miles away from the port where the blast happened. Israa and her husband, 34-year-old Ahmad Subeih, were struggling to deal with all the horror that happened. The couple is still in shock. “I have never heard anything similar to the sound of this explosion.” “We started to walk around and it was extremely sad, it was not describable the devastation and the sound of the explosion,” he said.

“First of all we heard an explosion but we thought it was far away, it was a small explosion,” Mahmoud said. Then came the second blast. “You can see in the video, it was a very, very, very big… You can’t describe the sound I heard, it was awful,” he added. Lebanon’s health minister reported that at least 135 people were killed as the result of the blast, over 5,000 were injured, and more than 300,000 people have been displaced from their homes. The cause of the explosion is now believed that 2,450 metric tons of the explosive ammonium nitrate may be to blame.

Everyone was completely unaware of the horrific incident that was about to happen. Mahmoud carried on filming in the aftermath of the blast, and shortly afterwards the bride and groom can be seen walking safely down a street. He says “thank God” they had no serious injuries. Luckily, everyone was not injured. After the explosion, the newlyweds tried to compose themselves and proceed with celebrations. What do you think about this video? Tell us your thoughts in the comments below! Don’t forget to share this article with your friends and family members!