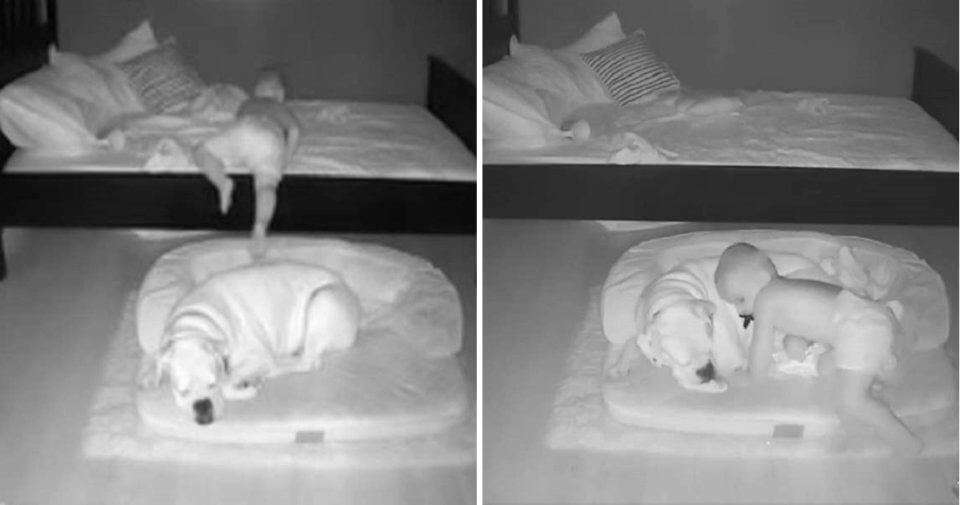 This is the adorable moment a toddler sneaks out of his bed in the middle of night to snuggle up to his best friend – the boxer dog named Brutus.

The pair snuggled up together in bed. In the adorable footage, the 23-month-old Finn Knudston is seen grabbing his blanket and teddy bear, climbing out of bed, and clambering into Brutus’ basket to sleep with him. Although the little boy lies across the dog’s rump several times, the canine friend barely moves and lets the boy get comfortable on his back.

Night camera footage captured the adorable moment Finn snuggled up to his ‘best friend’ instead of staying in his own bed. Finn’s mother, Paige Knudtson, said that the pair have been inseparable from the day Finn came home from hospital. The little boy was born with a serious heart defect and needed an emergency operation to save his life.

Finn and Brutus pictured sleeping together in the family home. She explained that when she was 20 weeks pregnant with Finn, an anatomy scan revealed that he had a cyanotic heart defect. “We were extremely lucky to have found this out prior to his birth, or he would not be here with us today,” Knudtson said.

Thankfully, after seven weeks of challenges, Finn was finally able to go home with his family. “Finn had his arterial switch at 11 days old and did great and after seven weeks, a few unexpected complications, and an additional surgery, the boy was finally discharged from the hospital.” And when Brutus the dog met his baby brother, the connection was instantaneous. “Once we got home, it was as if Brutus just knew Finn needed some extra close monitoring, and he has been by his side ever since,” Knudtson said.

Brutus has always slept with Finn because he senses his little brother needs extra protection. “Initially, Brutus would sleep on the rug in front of his crib every night.” But when Finn started sleeping in a bed, “Brutus began crawling up and sleeping in bed every night; it was as if he laid next to him to prevent him from rolling out of bed,” Paige said. She even set up a camera at home to find out how her son ends up curling up next to the four-year-old dog every night. “Finn sleeps with Brutus all night, every night. Whether it’s in the dog bed, Finn’s bed or the floor, the two always sleep together, and my heart is melting,” Finn’s mother told Bored Panda.

The two become best friends, and are inseparable even during sleep. What an adorable friendship! Do you love this cute friendship? Tell us your thoughts in the comments below! Don’t forget to share this article with your friends and family members!

What Will Taurus’ Messages Reveal About Them? Watch These Memes!

This Moose’s Daily Routine Is To Visit Her Human Dad, Who Saved Her Life

10+ Differences Between Cats And Dogs That Will Make You Laugh