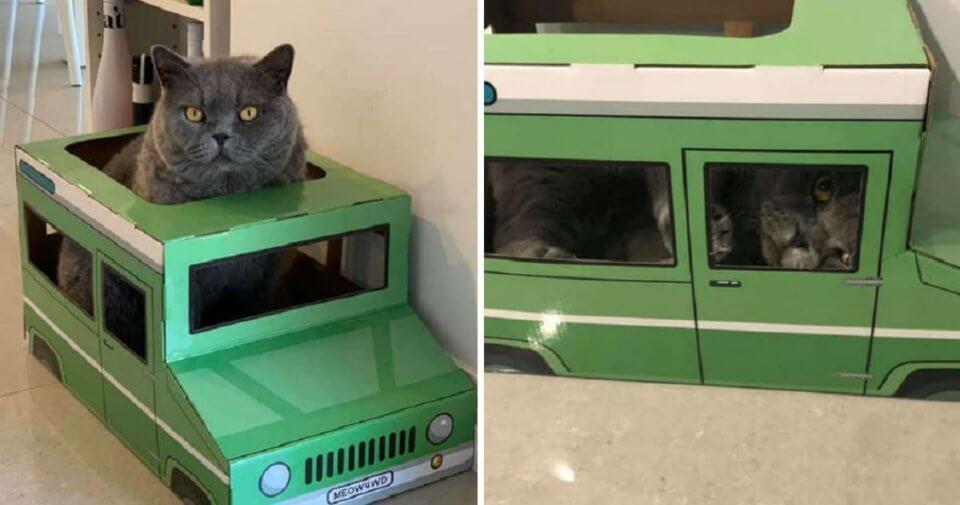 Meet Frank, a cute cat who claimed he hated toys. However, everything changed when he got a jeep. When Ben Vroomans met Frank for the first time two years ago, he realized that this was a quirky cat. Unlike other cats, Frank didn’t like to be touched or held. However, no matter how aloof and indifferent Frank was, Vroomans decided to adopt him. At first, Frank didn’t want to cuddle and snuggle with his human. He just wanted to stay alone and sleep all day. However, thanks to the love of his new dad, he came out of his shell, and now he becomes a sweet and funny cat. “Over the last couple of years we learnt to know each other, and he’s now got the biggest personality,” Vroomans told The Dodo. “Still can’t pick the bloke up, but he’s otherwise super affectionate now. Follows me everywhere. He’s my noisy little shadow, and a bit of a celebrity amongst my social group.”

For some reason, Frank doesn’t like toys or anything like that. However, he is a big fan of cardboard couches. He loves the couches so much that he can lie on them all the time. When his most recent couch started looking old and ragged, his parents bought him a cardboard jeep. At first, they were worried he would not like it because it looked like a toy, but they decided to try because they wanted to see what would happen. Amazingly, Frank instantly fell in love with the jeep. He’s so obsessed with it and spends all day just hanging out in it.

“He loves the crap out of this thing,” Vroomans said. “Can’t get him out of it.” According to Vroomans, the cardboard jeep only costs $8, but it has brought him so much joy and happiness. Now, Frank is so happy because he has his own toy. We hope that he can play with his beloved jeep for years to come.

Love this cute story? Feel free to share it with your friends and family members!

How It Would Go If Cats Could Talk…Too Funny!