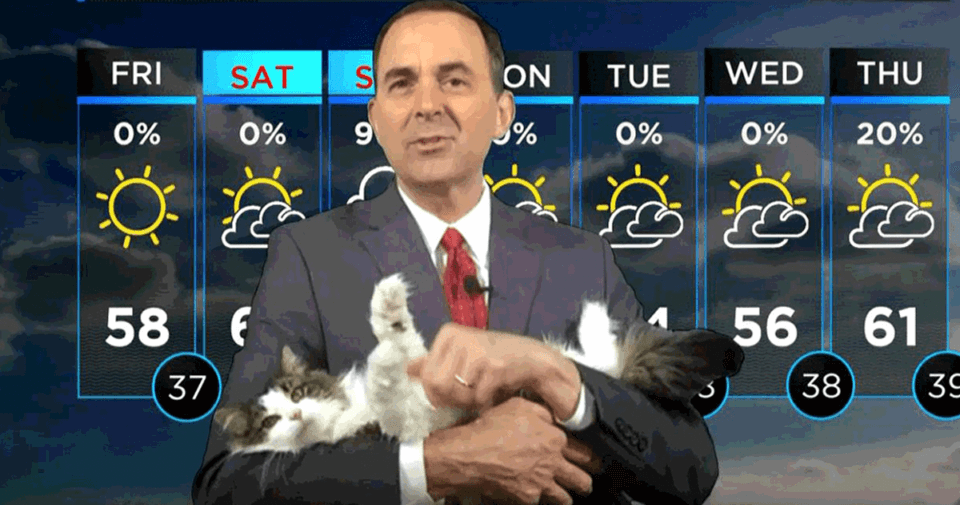 Although so many of us have to stay at home due to the coronavirus pandemic, it’s still good to know what’s in the forecasts. For this reason, weather forecasters are continuing their work from home. A meteorologist named Jeff Lyons from Washington, has done his weather forecast at home by setting up his new studio in his dining room. However, he drew people’s attention not only for his broadcasts, but also for inviting his cat, Betty, to join with him. “Working from home has been an adventure. I have my studio and green screen set up in the dining room. It’s nice to have a 30-second commute after the late news,” he told Bored Panda. At first, Lyons didn’t have any idea about allowing Betty to be on broadcasts. However, everything changed when Betty the cat decided to interrupt him during a live broadcast. The cat acted as if he was an aspiring weather forecaster herself, who wanted the spotlight, right in the middle of her owner’s forecast. For this reason, Lyons decided to let her join the broadcast and continued to co-present the show with her. He picked her up and gave her a cuddle while he finished his presentation. Ever since Lyons brought his cat on his show for the first time at the beginning of April, more and more people have started watching his broadcasts.

So, Betty is now viral on the Internet ! I've had a lot of requests for the video, so here is the behind-the-scenes (thanks to Jackie Monroe at the studio) and then what went over the air. As you can see, Betty needs to be limbered up before showtime ! What should our next stunt be ?

Betty has gained Lyons thousands of views and likes on his Facebook page. Some viewers even come from Europe and Australia, so it’s clear that they love Betty and her presence!

Even with all of your kind comments, Betty doesn't seem to be handling her new-found fame very well ! Of course, she's 10 years old, so can be a little crabby when I put her out of her comfort zone…but then again, aren't we all ?

The internet is now obsessed with the gorgeous kitty. In response to the internet’s love, Jeff and the rest of the team even gave her a nickname “Betty the weather cat.” Do you love this cute story? Feel free to share it with your friends and family members!

Horse Plays Dying Drama Whenever He Gets Ridden

Dumped In Cardboard Box In Woodlands, This Pregnant Cat And Other Two Kittens Were Rescued In Time

10+ Photos That Show Our Life Would Be Dull Without Cats

Pregnant Sister Gets Kicked Out Of OP’s House After Trying To Abandon Her Dog, Gets Protected By OP’s Family