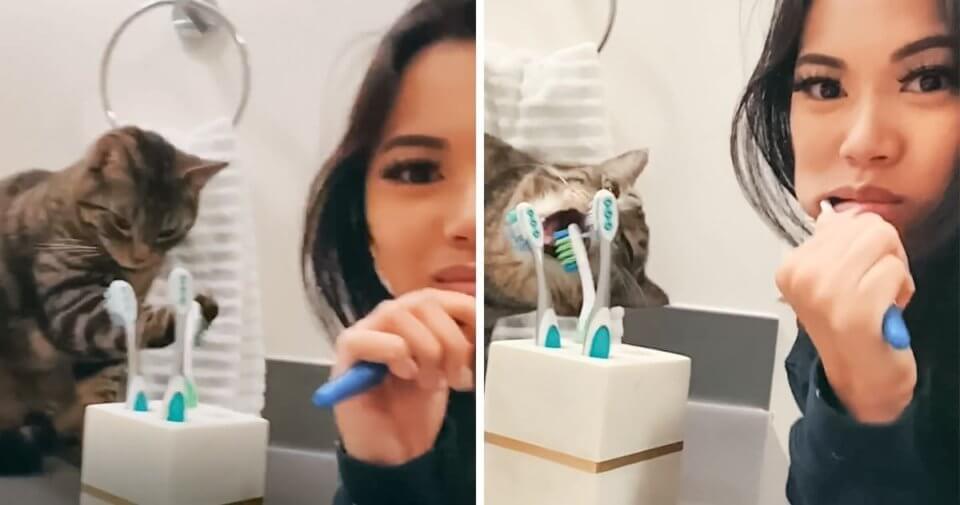 Achilles is a 2-year-old tabby cat who loves to mimic his mom, artist Stephanie Isidro. According to Isidro, Achilles began learning her morning routine when he was about a year old. “He’s extremely brilliant at observing what I do and picking up on my daily habits and routines,” Isidro told The Dodo.

One of his most unusual habits is his passion for brushing his teeth. He often wakes up at 5 a.m. every morning and follows his mom into the bathroom. After that, he sits on the counter and watches his mom while she brushes her teeth. “He sits there just watching me,” Isidro said. Then one day Isidro’s sister visited her and put their toothbrushes in the holder. When Achilles discovered the new toothbrush, he immediately hopped onto the counter and began taking care of his white teeth. Apparently, the cat had been waiting for an opportunity to have his own toothbrush.

“I was doing my usual morning brushing and I noticed Achilles suddenly mimicking me with my sister’s toothbrush. At first I was shocked over the fact he used the toothbrush, but then I realized how smart he was to just learn that on his own. He’s very intelligent!”

The clever cat started doing this often when Isidro bought extra toothbrushes for her visiting sisters. “I even started leaving an extra toothbrush out just for him,” Isidro says. It looks like Achilles believes he’s human because he often acts like his mom. “He acts like a mini-me,” Isidro says. “He will go to bed if I go to bed and nap when I nap. He even sleeps very similar to me — his tummy up and tucks himself under the covers.”

Do you love this story and this clever cat? Feel free to share this post with everyone around you!

Get To Know The Asian Mountain Wolf Dhole And Their Amazing Look!