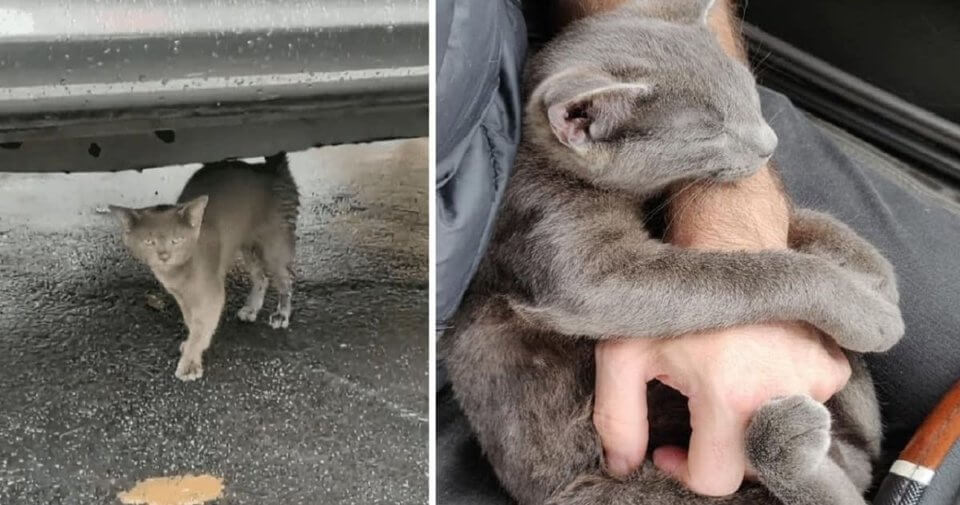 A man named Jason Belisha from Georgia shared a unique story of how he met a stray kitten in a parking lot. The sweet cat captured his heart, so he decided to take the kitty with him and help him find a new owner. According to Belisha, when he was returning a rental car, a cute gray-colored kitten suddenly appeared and cried for help. The kitty immediately ran into his arms, sniffed his hand, and proceeded to rub his face all over him. It was clear that the kitten was asking for love and attention from him. “I was returning a rental car and heard this little boy meowing under the car next to me, so I bent down and he came right up to me,” Jason said.

After giving some the kitten some cuddles and pets, Belisha put him down. However, the kitten was continued to cry and follow him around. He was adamant about following the man home. For this reason, Belisha picked him up and put him right in the car with him. On the way home, the kitten wrapped Jason’s arms and fell asleep in his lap. “He was naturally super friendly and sweet,” Jason said. Jason brought the kitty home, called him Popeye, fed him and even introduced him to his corgi dog. Amazingly, the two animals became instant friends and formed an adorable bond. A week later, a friend fell in love with Popeye and offered him a forever home. It was bittersweet. Although he loves Popeye, he decided to let his friend care for the kitten. He knows that he will be loved and cared in his new home that he deserves. “He is an amazing cat who I will often go visit at my friend’s place.” Watch the video below to see the full story:

Couple Invites Their Chubby Cat To Join Their Wedding Photos, And The Results Are Adorable