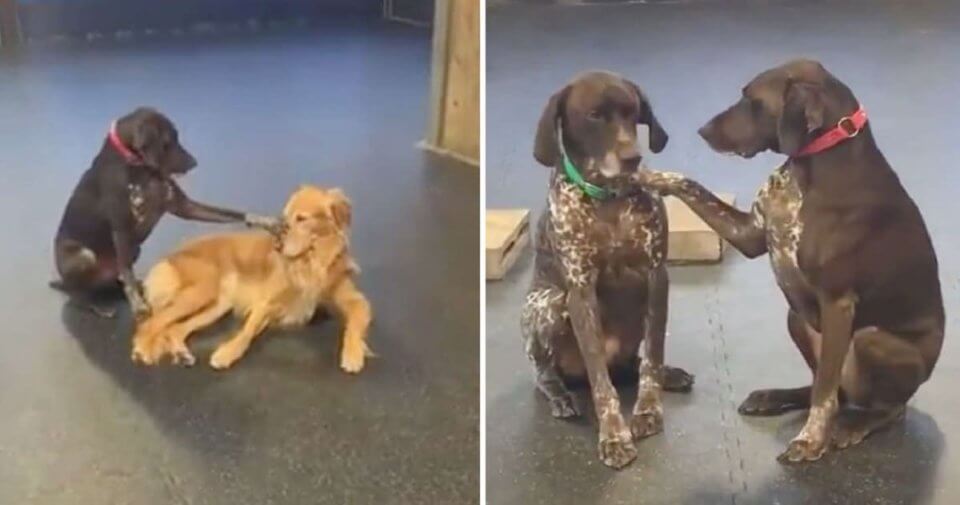 Recently, a doggo named Ruby became an internet sensation after one of her videos went viral on the internet. In the viral video, the German shorthaired pointer shows her affection and love for other dogs at daycare by petting them. Ruby and her brother Miles are regular visitors at The Den Doggy Daycare in Burlington, Ontario. There, Ruby’s strange but adorable behavior was discovered by Alanah Lorraine, the dog owner of a dog named Lexy.

Alanah Lorraine first noticed Ruby’s unusual behavior a few months ago. “She does it every time she is in. We think she wants attention!” Lorraine told The Dodo about Ruby petting and patting her friends at the daycare. Ruby loves making friends, so every time she is around other dogs she shows her affection for her fellow pups by giving them sweet cuddles they deserve. She pets other dogs almost every single time that she comes to the daycare.

Ruby’s dog friends often seem confused, befuddled, and bewildered by her actions, but they still seem to enjoy Ruby petting them with her paws. “Most dogs aren’t bothered by it and just let it happen,” Lorraine said. According to Alanah, she thought that the video would be adorable, but she never expected that it would go viral. People around the world absolutely loved the video and couldn’t get enough of Ruby petting other dogs! We are so happy to see everyone enjoying Ruby’s video. You can also watch the adorable video here:

This is Ruby. She likes to pet the other dogs at daycare. 14/10 extremely relatable pic.twitter.com/5KgOnL5kwW

After all, dogs are pack animals who want to feel connected to others, so they reached out with their paws to touch other dogs and people. Do you love this video? Please leave a comment and let us know what you think about this post. Feel free to share the sweet video with your friends and family members!

10+ Reasons You Should Fall In Love With A Cat Person