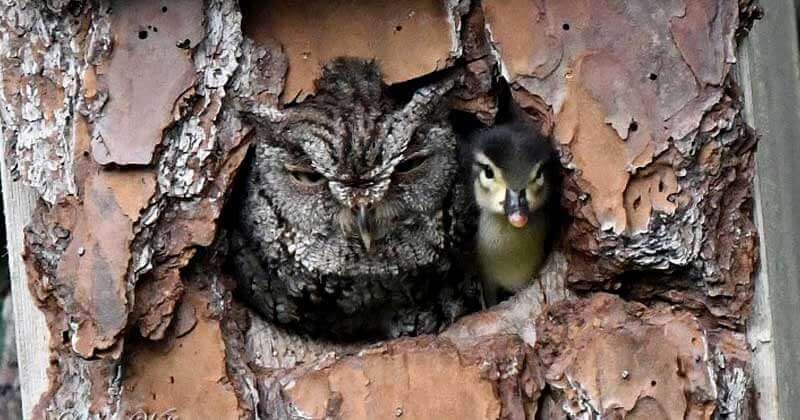 Friendship is something that’s very marvelous. Two animals of different species can get along well with each other. There is no strange to see a dog befriend a cat. But whether it’s normal when an owl and a duckling become a pair? This actually happens. This rare picture was captured by wildlife artist Laurie Carver-Estes. Keep scrolling!

An owl and a duckling were seen sitting together in a nesting box on the tree. A wildlife artist named Laurie Carver-Estes, living in Jupiter, Florida, spotted this when she was out in her backyard. At the beginning, Laurie could hardly believe in what she was seeing. But she immediately took out her camera and snap a picture. It could be a once in a lifetime shot. What an odd pair!

People are curious about how the baby duck and the owl could be in the same nest. Laurie thinks that the owl hatched the duckling after a female duck left its egg in the nesting box. A few weeks before, she and her family had seen a female Wood Duck transfer a raided duck egg to this box. Just a few minutes later, the duckling came out of the box, landed on the ground, and waddled to the nearby pond.

Laurie believes that the duckling was reunited with its parents. She also said that the photo of the owl and the duckling in the birdhouse would be one of the most unique ones in her life.

Is it a lovely story? If yes, just share it with your family and friends. Enjoy!

Cat Adopts Baby Chick And Nurses Him As Her Own Kitten

These Photos Will Make You Fall In Love With Canada Lynx