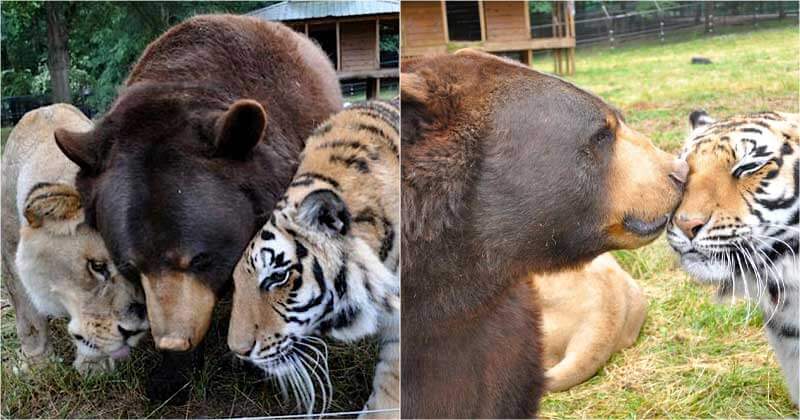 There is no strange to see a cat getting along well with a dog pack or a fox befriending a dog. But how it would be when it comes to a family of 3 different species? Lion, bear, and tiger? Most of us think that it can never happen but actually it does. They can find a way to stay in harmony and live happily. This is also the story we would like to share today. Keep scrolling! After rescued from old abusive owners, a trio of lion, bear, and tiger decided to form their own little weird pack. Amazingly, these furry giants live together in harmonies, regardless of their differences. It strongly proves that friendship has no barrier. Love can care can win all. Back in 2001, when the Georgia State Police broke into a drug dealer’s home, they stumbled upon a heartbreaking scene. 3 terrified cubs lain in the basement with malnourishment and parasite infection, possibly caused by animal abuse. Their conditions at that time were terrible. Baloo, a black bear was trapped in a harness that had cut through his skin. Shere Khan, a Bengal tiger was almost dead and Leo, an African lion, had been locked into a small box although it had an open wound on his face. The authorities immediately contacted the Georgia Department of Natural Resources to help 3 poor animals get proper medical treatment and find a new home. The trio got the help of a rescue center called Noah’s Ark. At the beginning, Baloo, Shere Khan, and Leo seemed to be still obsessed with what they had gone through. Thanks to the love and care of the staff of the rescue center, the cubs began to stay normally again. They groomed, cuddled, and played with each other. The trio soon became inseparable, living as siblings. They were so close to each other. If the rescue center separated them, it would hurt all. They experienced a tough time to live healthily and normally again. And the friends who accompany them through this period are precious. Regarding the personalities of the gang members, Baloo the American black bear was a confident, caring, and trustful giant. Meanwhile, Shere Khan the Bengal tiger, the smallest of the trio was mischievous. And Leo the African lion was an extrovert. He enjoyed his rest and also got hooked into explorations. The trio lived happily together for 15 years. The brothers were never caught fighting or getting violent with each other, not even once.

It’s heart-wrenching to see our beloved ones leaving us. The three brothers experienced the same. Leo was diagnosed with cancer in 2016 and left his other siblings shortly thereafter. Shere Khan said goodbye to his happy home 2 years later, in 2018. Baloo is now the only member of this trio. He is currently living in the sanctuary, waiting until the day he reunites with his brothers. If you are doubted about what true friendship is, just let this story help. The friendship and brotherhood of Baloo, Shere Khan, and Leo are enough to warm up the cold hearts.

People’s Hilarious Response When Someone Offers To Buy Their Pets At $50,000