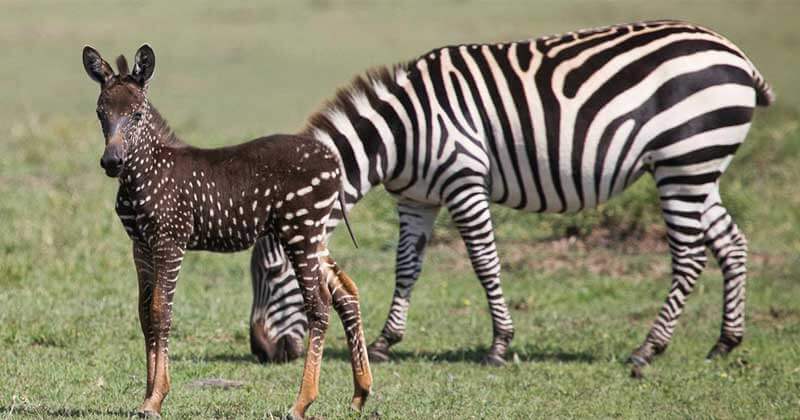 Call the doctor, we’re in love. What’s more awesome than a horse? A zebra. And what’s cuter than a zebra? A baby zebra. Do you know what’s even cuter? A baby zebra with spots instead of stripes!

A rare polka dot baby zebra was spotted (pun intended) in Kenya, and the internet is going wild. The animal has already captured many a heart (ours included), and photos of the adorable creature have gone viral. What’s more, we might finally put to bed the age-old question of whether zebras are white with black stripes or black with white stripes. The unusual zebra was seen in the Maasai Mara National Reserve in Kenya, where photographers Rahul Sachdev and Antony Tira, who is also a tour guide, snapped some photos of it.

Parmale Lemein, a wildlife specialist from the Matira Bush Camp, told the Daily Nation that this was the first such case of a polka dot zebra at the Mara Reserve. It’s most likely that the baby zebra has melanism, which is the opposite of albinism. However, he had some sad news: no similar zebras have survived past six months with such a condition in African parks. According to some scientists, zebra stripes form when there’s an inhibition in melanin production, meaning that the animal is most likely black with white stripes and not the opposite.

But zebra stripes aren’t just for show. Live Science argues that they help the animals stay cool in the African heat. There are also theories that stripes help zebras hide from potential predators, and also help them avoid getting bitten by flies that are known to transmit diseases.

Dear Pandas, what do you think of the polka dot zebra? Do you think that zebras are white with black stripes or black with white stripes like some scientists argue? Let us know in the comments below.

Man Wanted To Adopt A Shelter Dog, But Was Instead Chosen By A Kitten

Elderly Man Stops To Protect His Dog From The Rain, And The Internet Is Melting

Finland Reindeer Do Shine After Being Painted With Reflective Paint, And That’s For Their Own Good!