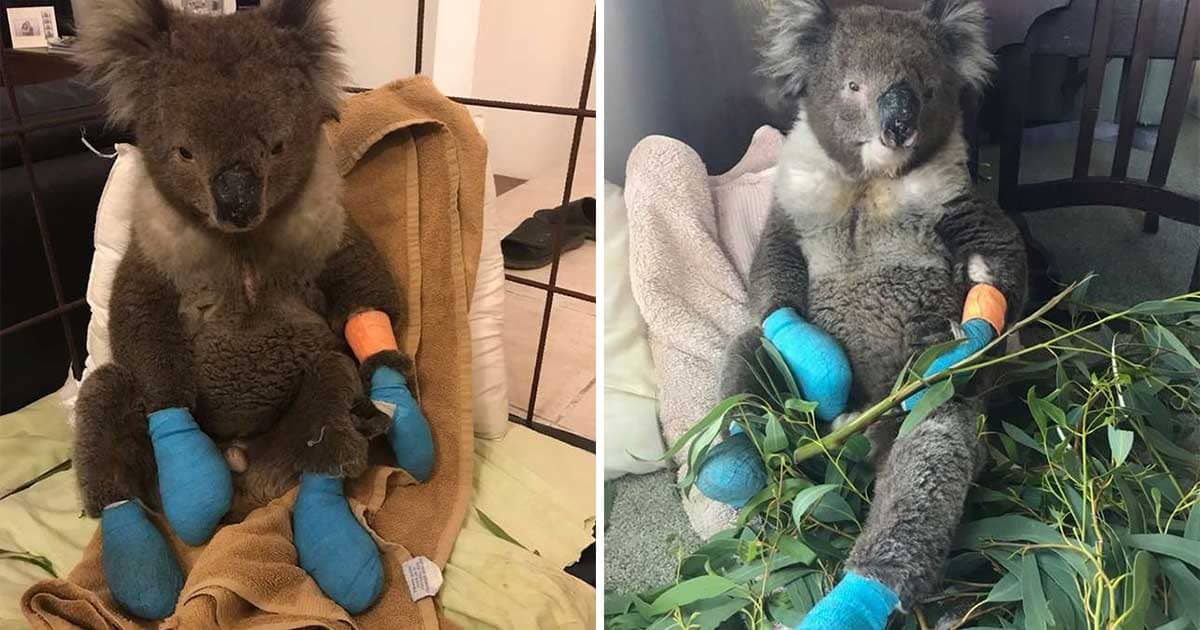 Wildfires raging across Australia since September has caused catastrophic destruction to the habitat of billions of animals. In that, the population of koalas is decimated. Billy is just one individual in that massive number who got his fortune rescue by Lucy and Adam Francis. The couple found this koala clinging helplessly in the middle of soot and ash. They found the little critter was suffering severe burns all over his feet. Francis said that as if Billy was aware of the kind hands, he gave his trust back. Billy knew there was no harm coming from them, so he allowed Lucy to take him off the tree and get close to him lately. He was then rushed to a koala rehab center and given the treatment for the wounds. Billy got his four paws bandaged, so he was unable to climb a tree like usual. That made the standard enclosure unfit him. Thus, the team created a makeshift pen stuffed with a camping mattress and a pillow.

Billy with his paws bandaged At first, Billy found it unusual had he never sat in a normal koala position. But he finally got himself a comfortable posture and started to get some rests. His fosterers reported that Billy was one of the sweetest koalas who appeared to be gentle and graceful.

Billy is napping with food readily The couple began to build a relationship with the koala by stroking his fur and comfort him with gentle talks. “His personality is so gentle and calm, even when we have to rub cream into his blisters and burns, or administer his vitamin mixture — which we’re really sure he hates — it’s like giving a very furry, reluctant child their medicine,” Francis claimed. Now, Billy is recovering in safety and waiting for a day he can reunite with the wildlife. His rescuers want to make sure that day will come, though unlikely at the moment, soon and merry.

Man Made Colleague Cry By Calling One Of The Office Cats Dumb, And The Matter Escalates And Goes To HR

These Funny Photos Will Prove Huskies Are The Strangest Dogs Ever