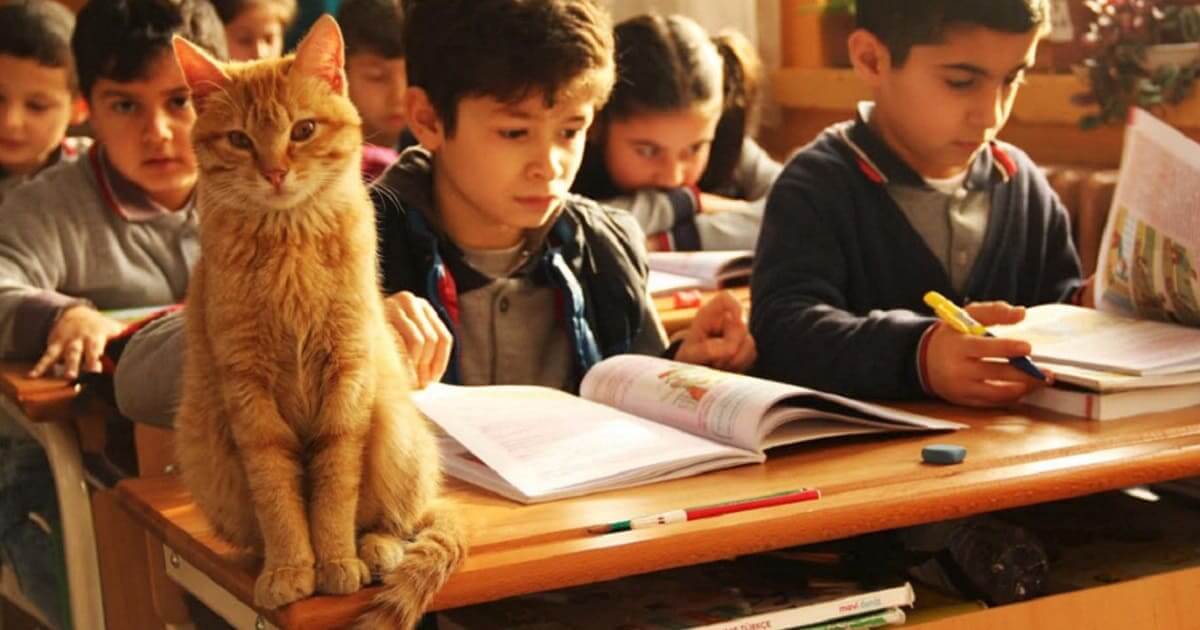 This is Tombi, the little orange cat wandered into a public elementary school in the city of Izmir, Turkey and decided to make it his forever home and the students there his friends. Last month, Tombi showed up in the school’s garden and just kept coming back. Unlike most stray cats in the area, who can be skittish and scared of people, Tombi is friendly and outgoing. He loves walking up to the children seeking pets and attention. No one knows exactly where Tombi came from, but there is no doubt at all that he has found the place where he belongs. After a couple of weeks of hanging around the school’s garden, he decided to become a student. So, he wandered into third grade classroom to start his study. Özlem Pınar Ivaşcu, a third grade teacher at the school, was surprised when the little kitty sauntered into her class. “He came into our classroom,” Ivaşcu told The Dodo. “The children liked him very much.” And just like that, Tombi became a fixture in Mrs. Ivaşcu’s class. Many people might think that having a cat prowling around the classroom might seem like it would be distracting for young students, but Mrs. Ivaşcu has found that Tombi was having the opposite effect. The students were captivated by the kitty’s charm and playful curiosity. They become more excited to be in class, and instead of horsing around during breaks, they’ve been calmer and more focused. “The children come on time to school, and they are taking care of Tombi,” Ivaşcu said. “This is good for them.” However, a parent lodged a complaint after knowing that a stray cat was in wandering around the school. They said that Tombi posed a health risk and forced him to leave. İvaşcu took Tombi to a veterinary clinic to have him vaccinated and later found him a good home. However, the little boy was not happy in the house and didn’t get along with the other cat already living there. For three days he didn’t eat almost anything. So, İvaşcu and her husband decided to take him back and kept him in their house. Students missed Tombi so much, so they wrote letters and did drawings for their feline friend to cheer him up. It was clear that he missed his friends, too. İvaşcu shared Tombi’s story on social media and it quickly went viral. People tried to do everything to help Tombi come back to the school with his friends. “The story got a lot of attention and support on all TV news,” İvaşcu said. “I had a lot of support from many people, including from my manager and the director of education in İzmir.” With the great support from many people, Tombi can return to school. As soon as the ginger cat came back to the classroom, he was himself again. The children were thrilled to have Tombi back in their class, and he also had a safe place to eat and sleep, with lots of love and affection.

If you love this story, please share it with your friends and family members to brighten their day!

Nasty People Bullied Neighbors, Then Got Sweet Retribution From Their Special Friends

10+ Adorable Photos Proving That Your Kids Need A Cat