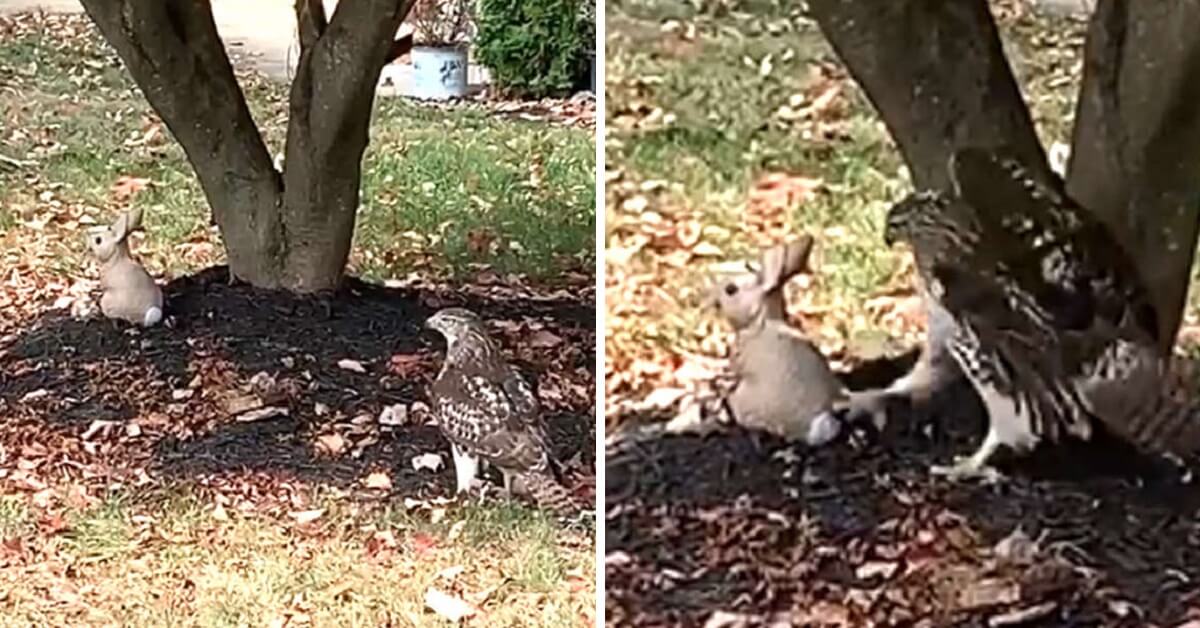 Hawks are birds of prey, also known as raptors. They are carnivorous birds, so they only eat meat and hunt other animals for food. Their most common food is small mammals, such as mice, rats, rabbits, voles, and squirrels. Although it sounds awful to think about hawks eating cute little animals, they must eat to survive, and this is all a part of nature. Hawks are so strong, so small animals are scared of them, and often try to stay away from them. Therefore, these predators are so confident of their strength and ability. They can hunt and kill any animals that they want. However, the fearsome bird of prey in this story seemed to meet a redoubtable opponent.

When the hungry hawk saw a plump, bushy rabbit sitting in the shade of a small tree, he thought that he would have an easy meal. But then, things took a weird turn. Rather than scampering away, the bunny didn’t move and remained totally unfazed. As it turned out, the “bunny” was actually just a lawn ornament. Unfortunately, the hawk didn’t know about that and was probably wondering why it wasn’t running away. He has clearly never met a bunny nearly as brave as this one, so he was totally confused about it. After many attempts, the hawk finally gave up and flew away empty-handed. Thankfully, homeowner Steve Grimme caught the whole scene on video and shared it on social media.

Watch the hawk vs fake bunny video below:

I do not post much on FB but this was a unique view I had yesterday and feel the need to share.

“I couldn’t believe when he poked the bunny a couple times. I was laughing,” Grimme told The Dodo. “And at the end, when he turned away from the bunny, my only thought was he was saying to himself, ‘Geez, I hope none of my other hawk friends saw me do that!?”

Love this video? Please share it with your friends and family members!