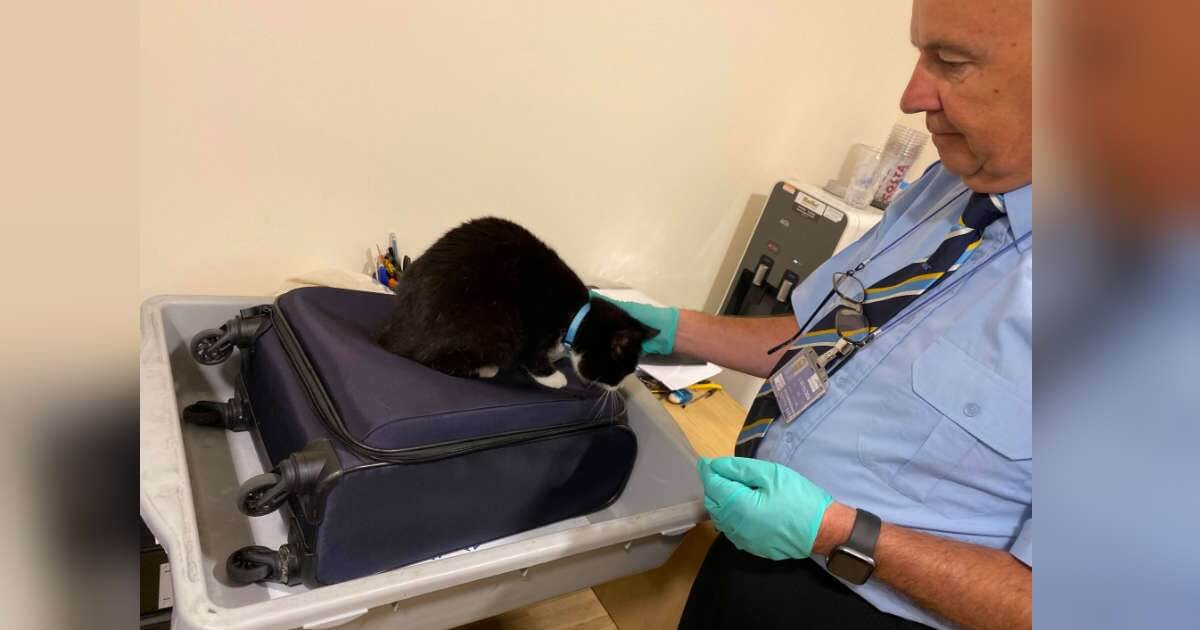 Nick Coole and his wife Voirrey Coole from Isle Of Man, the United Kingdom were on their way to New York on Wednesday to celebrate his 40th birthday when they received a surprise none of them were expecting. As the couple was heading for Big Apple, they got unexpectedly held up by airport security. They couldn’t believe their eyes when the staff discovered a cat inside their luggage. Turns out, their cat Candy had climbed into their suitcase, and the little girl wasn’t clearly happy about being left behind. “Our hand luggage didn’t have much in so we could bring shopping home. But Candy, our cat, found a way in and off to the airport we all went. Airport security were all very puzzled and repeatedly asked if the bag was ours after it has been through the scanner,” Coole told The Dodo. Coole said that this wasn’t the first time she had secretly hitched a ride out of their house. “She disappeared for two weeks once only to be found in a different town when we were away on holiday. We think she got into a builder’s van. She’s very good at sneaking into small spaces.” The staff at the airport had never seen anything like it before, but they all had a good laugh when they realized that it was a genuine mistake. Thankfully, everyone stepped up to make sure Coole didn’t have to miss his special trip. Nick and Voirrey’s friends came and picked up Candy, so the couple was able to catch their flight to the US before the plane took off.

“The staff were awesome and helped organize getting our Candy home so we still made our flight,” Coole said.

After the unusual travel experience, Nick took to Facebook and wrote: “You know that feeling when you get ushered into a side room at airport security because you’ve got a cat in your hand luggage? Candy decided to sneak into our hand bag, thanks Barry and Lorna for picking her up so we can head off on our holiday. Fair play to airport security for helping to get her home so we could catch our flight.”

You know that feeling, when you get ushered into a side room at airport security because you’ve got a cat in your hand…

What a funny and sweet story! If you love this story, please share it with your friends and family members!

Officers Thought They Were Facing A Tiger, But It Turned Out A Mom Cat Was Guarding Her Kittens