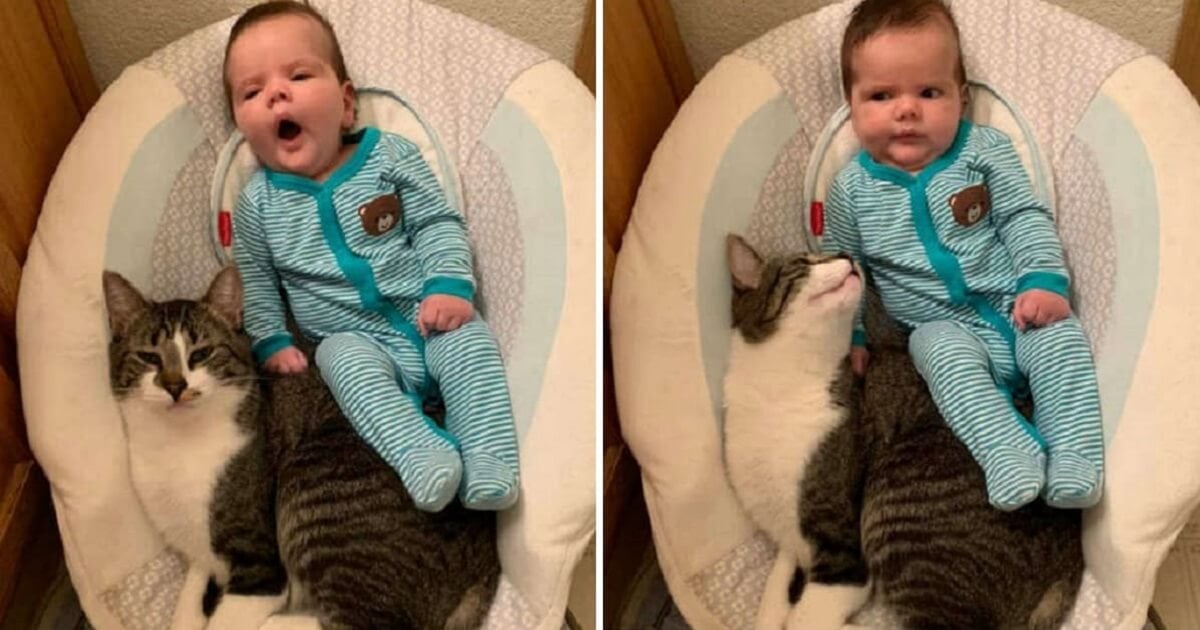 While some cats need cuddles like they need air, others just need space. And the cat Flynn in this post is one of the typical examples because he doesn’t like to snuggle and cuddle with his owners. But when Flynn realized his mom was pregnant, he became really protective and cuddly. “He began following me around the house,” Rachel Franzen, Flynn’s mom, told The Dodo. When Flynn saw the new baby bouncer for the first time, he was so excited and thought it was his. However, Flynn didn’t seem to realize that the comfy chair wasn’t meant for him. “Flynn is in the bouncer every morning,” Franzen said. “He definitely thinks it’s his. He will sit in it and roll upside down and want to have his tummy rubbed. It’s his ‘after breakfast’ sleep spot.” Whenever Franzen is ready to put Rory in the bouncer, Flynn has already set up camp there. But amazingly, Flynn didn’t seem at all fazed or bothered by having Rory snuggled up next to him. He was probably just wondering why Rory kept trying to use his chair. It was clearly his favorite chair. Thankfully, Flynn loves Rory and is willing to share with him, so they stayed cuddled up like that until it was time to move on. “Flynn loves Rory, so he licked Rory’s hand and then started grooming himself,” Franzen said. We love their friendship, and we believe that there will be many more bouncer chair cuddle sessions in the future.

If you love this story, please share it with your friends and family members!

10+ Cats Who Are Unaware Of How Silly They Are