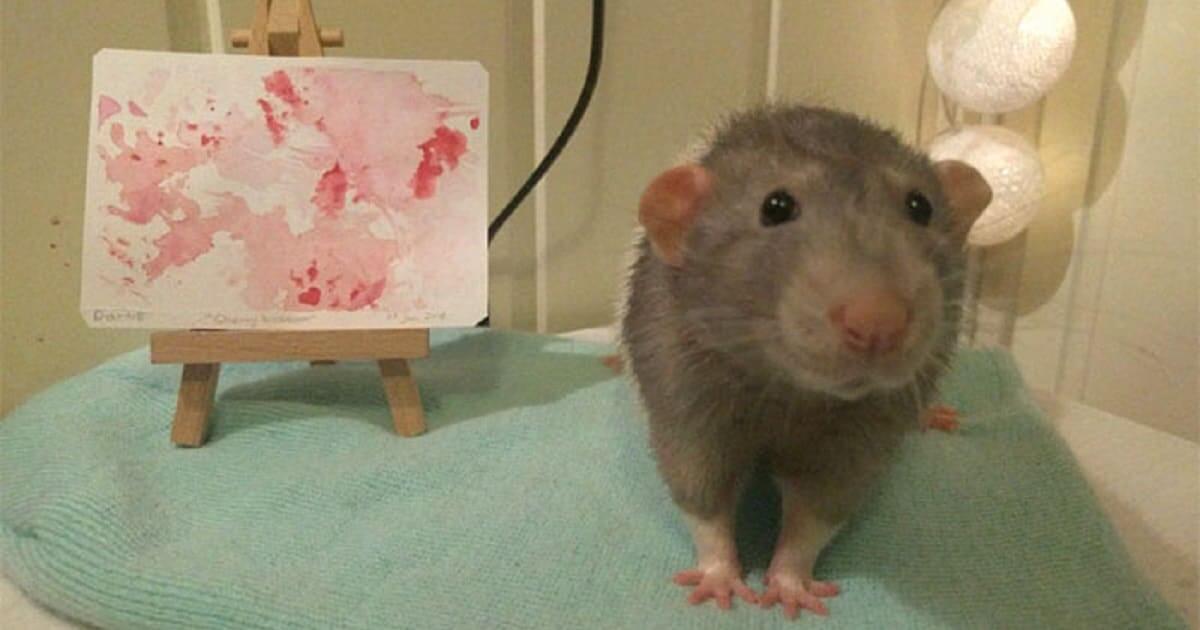 When it comes to rats, most people fear them, and some may be disgusted because they are dirty creatures who live in waste and crawl through the sewers spreading disease. However, that’s a common misconception about them. In fact, they are fastidiously clean animals, grooming themselves several times a day. They are less likely than dogs or cats to catch and transmit parasites and viruses. Moreover, they’re actually pretty smart and adorable little creatures who make great and talented pets. Meet Darius, a late pet rat from Norway, who went viral on social media for his artistic abilities. Darius’s owner, Amalie Markota Andersen, an animation and digital arts student, taught him how to make watercolor paintings with his tiny paws. After seeing Darius’ wonderful works, people were really impressed by his skills. “I got him in 2017, he was one of many rats in the litter. All the rats seemed amazing, but Darius was just too precious not to choose. He looked so kind and gentle, I instantly fell in love with him the moment I saw him,” Andersen said. “I’ve had rats all my life, since I was around 14-15 years old,” Andersen told Bored Panda. “I’ve discovered how great they are as pets on the internet. Rats were just beginning to become popular as pets, I think. After I had my first rat, I just kept on getting them. Rats don’t live very long, usually 2-3 years, so I’ve had 9 so far. Darius was one of them.” When Amalie had Darius, she dipped his feet into a non-toxic watercolor set and just let him walk back and forth on the paper until it started to look like something. It took Darius about 10 minutes to complete a painting and that Amalie sold three or four of his works. After sharing his first painting on Tumblr in January 2018, Darius took over the Internet by storm. Amalie said that she was so happy when people liked him and it was what he deserved. As Darius’ internet fame grew, Andersen sold his works and used the money to buy him a harness so that she could take him outdoors, and the pair could explore the outdoors safely. Sadly, Darious crossed the rainbow bridge earlier in 2019 due to old age. Even though he has passed away, his works still touch the hearts of thousands of people all over the world and bring joy to them. “It’s been crazy seeing all of it blow up like this. I never expected it would make people so happy. But I’m glad it did. Unfortunately, Darius didn’t make more than 4 paintings when he was still alive, but I am thinking about doing the same thing with my current rats, Gucci and Mango.” Woman Asks If She’s Overreacting While Yelling At Neighbor’s Kid To Get Away From Her Dogs, Redditors Support Her