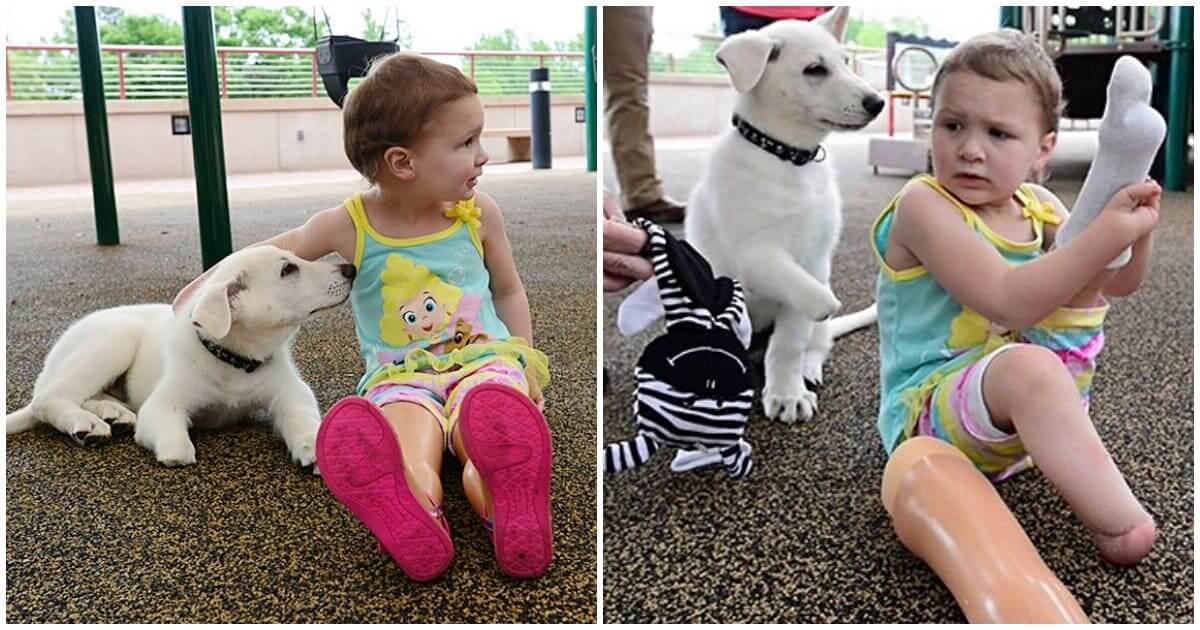 Sapphyre Johnson, a little girl in Tennessee who had both of her feet amputated when she was only one year old, has found a special new friend named Lt. Dan, a white German Shepherd puppy missing a paw. Sapphyre was born with a birth defect that left her with missing fingers and required both of her feet to be amputated. When she was 3 months old, doctors at Shriners Hospital For Children in Greenville, South Carolina, performed several surgeries to equip her with prosthetic feet. Sapphyre adopted Lt. Dan when he was nine weeks old. He was the only pup in a litter of nine who was born missing a front paw. Because of the pup’s disabilities, breeders suggested Lt. Dan’s owner, Karen Riddle to put him down. However, she refused to give up on him and decided to find the dog an owner with special needs who would be a good match for the pup. Thankfully, Riddle called Shriners Hospital and she learned about Sapphyre. She knew that Lt. Dan would have a great home with Sapphyre and the pair would share a special bond. The Johnson family also agreed that L.t Dan would be a perfect addition for their house. “The first time I showed her a picture of the dog, she looked at it for a moment, and she said, ‘That’s my puppy. He’s just like me,’” Elaine Hardin, Shriners child life specialist said. “He’s a special dog and he’s going to a special child.” When the two met for the first time, they became instant besties. Sapphyre loved Lieutenant Dan and the pair went on to form a special bond. Watch the video of Sapphyre and Lt. Dan here:

Fate definitely brought these two together, and we hope that the dog will help Sapphyre explain her disabilities to other children and Sapphyre will feel more confident in her life. Shriners has offered to make a prosthetic foot for Lt. Dan as well when he’s big enough to match Sappyhyre’s prophetic legs. Please share this story with your friend and family members!

Incredible Footage Of A Cat Cuddling An Endangered Black Rhino