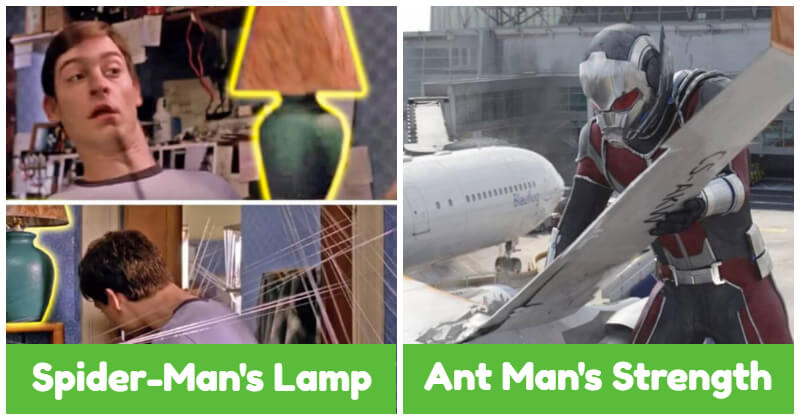 The efforts of a number of people are involved in the making of movies and comic books. When designing the intricate settings and characteristics of the primary characters, they usually try to think through every aspect. Even the most meticulous method can be tainted by minor defects and errors, all of which will be noticed by the most attentive and demanding viewers.

We have compiled a list of 11 logical goofs from superhero films that you could have missed behind the curtain of loud action.

11. Spider-Man and a solid lamp Peter Parker accidently yanked one of his lamp and smashed it against the wall while attempting to figure out how his web-shooters functioned. But when his aunt knocks on his door a few minutes later, we can see the completely unbroken lamp in the same spot where it was before being broken.

10. Spider-Man and the time mix-up There is a logical fault in the Spider-Man plot related to how film creators failed to determine the exact timeline when the entire plot of the film happened.

Things happen in 2016 in Captain America: Civil War. In the same movie, The Secretary of State claims that the first attack on New York occurred four years ago, leading to the events of The Avengers must have occurred in 2012.

Spider-Man: Homecoming takes place a few months after Captain America: Civil War. The film, on the other hand, starts with a retrospective view, specifically the process of cleaning up the wreckage left behind from the Avengers’ first battle with the invaders.

This points to a larger issue: if Spider-Man: Homecoming happened 8 years after The Avengers, the major plot of Spider-Man would occur in 2020, 2 years after Avengers: Infinity War. Spider-Man, on the other hand, has yet to be admitted into the Avengers’ ranks. Perhaps Spider-Man is a time traveler who returns to the events of 4 years ago in 8 years, which makes no sense at all

9. Thor and the sides of the world Thor makes a geographic error when he chooses to travel in the wrong direction. It all starts with a misunderstanding of the world’s sides. When the thunder god goes in search of his hammer, he discovers that it is located in the west. Thor examines the sun to determine which way he should move.

The sun was in the east because it happened in the morning, and all objects cast shadows to the west. Thor was traveling to the north since his shadow was cast to the left of him (which is the wrong direction for him).

8. Man of Steel and the time zones The makers of Man of Steel, the Superman film, are also unfamiliar with geography. In the film, aliens from the planet Krypton send a message to human, which displays on all TV screens throughout the world at the same time. Regardless of time zones, it is midnight everywhere on Earth, according to what we see in the movie, which is just impossible.

7. The traveling of Loki’s scepter We see Black Widow wielding Loki’s scepter at the end of The Avengers. The Avengers eventually got their hands on this powerful and hazardous item, and they should’ve plainly kept it secure. However, we learn at the start of Avengers: Age of Ultron that the scepter has fallen into Hydra’s clutches, yet we have no idea how this transpired.

6. Loki and his telepathy Loki, Thor’s sworn brother, falls into space and travels into a black hole at the end of the movie with the same name. After that, Thor and his father, Odin, have a private talk when Thor admits that Odin is the wisest ruler Asgard has ever had.

Thor and his father, Asgard’s king Odin, have a private talk after which Thor admits that Odin is the wisest ruler Asgard has ever had. Thor approaches Odin again at the end of Thor: The Dark World.

Odin recalls Thor’s statements about his excellent reign and inquires if he still adheres to his convictions. However, that was no Odin; instead, it was Loki who disguised as Thor’s father. It’s unclear how he learned about Thor and Odin’s intimate discussion. Mr. Freeze, a villain from Batman & Robin, is extremely fortunate.

First, he succeeds in avoiding freezing the precious stone when he freezes Robin, who is carrying a diamond in his palm. As a consequence, the villain takes the diamond from Robin’s grasp with ease. He should’ve had to cope with a covering of ice on the diamond first, logically.

Second, as Mr. Freeze clamps Batman to the wall, the latter chooses to settle into a comfortable posture. It appears that the superhero stands straight and raises his hands to make it easier for the villain to freeze him.

4. Batman and the crowd Only the most observant fans, who have seen The Dark Knight at least a few times, were aware of the error. The helicopter’s searchlight cast light on a room filled with individuals in the scene on the roof.

Obviously, while witnessing the filmmaking procedure, the movie team got caught in the camera shot. Two superheroes in the Marvel world have the same appearance, both played by Chris Evans. He portrays Johnny Storm aka Human Torch in Fantastic Four, and Captain America in the Avengers-related movies. It’s worth noting that F4 was produced by 20th Century Fox rather than Marvel.

Wolverine’s skeleton is constructed of extraordinarily strong adamantium, as we all know. When a cop shoots at him, though, the mutant falls unconscious and the bullet goes straight through his brain.

But how did the bullet penetrate through Wolverine’s skull and knock him down if his bones are as solid as we were told? At the very least, his regeneration skills did not fail him, and he was back to normal in a matter of minutes.

1. Where does the Ant-Man’s strength come from? By increasing the gap between his body’s atoms, Ant-Man can transform into a true giant. Simultaneously, he gains superhuman strength, allowing him to move buses and even planes. Where does this power originate from?

While wearing his costume, Ant-Man can lift four times the mass of his own body, according to the comic book. Even if the spacing between his body’s atoms is increased, his mass remains constant. The weight of an airplane is substantially more than that of four persons. Even if Ant-Man shrinks, his weight should remain constant. Despite this, the hero is able to conceal a tank in his pocket.

There’s also the fact that, according to the theory, Ant-Man can’t shrink any smaller than the sum of his own atom sizes (only the distance between them shrinks). But, in the end, he shrinks to less than 1 atom and enters the quantum realm. How did he manage it? The answer is unknown.

Even superheroes, who are always ready to save our world from any peril, aren’t faultless, as we can see. Have you ever found any errors in superhero films? Perhaps you can add a few fascinating facts to this list. Leave them in the comments section.