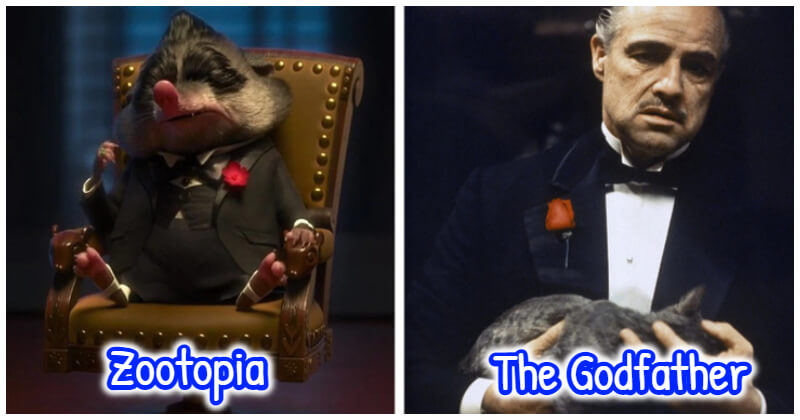 Some believe that cartoon is just for kids, but over the years when animation has grown only more as technology has evolved, many adults also draw their attention to animation. For this, many studios have increased their audience as well as their earnings. Cartoons give the distinctive ability to grant the film creators and the audience imagination to limitless possibilities where anything can happen.

Despite being introduced that it’s for kids, it doesn’t mean the style must remain for only kids. There are many details from cartoons that only adults can understand and kids will miss completely. Even some of them can’t be clearly explained by adults. Do you remember a scene when Ariel touches a painting of a woman sitting next to a candle? It’s the Magdalene with the Smoking Flame by Georges de La Tour. In the painting, there is a human skull that reveals a story not appropriate for children. The new Magdalene may be Ariel.

The cleansing of the Stink Spirit is one of the most memorable scenes in the movie. Actually, it relied on Miyazaki’s personal experience, seeing the river next to his house being cleaned. The river was full of trash like an old bicycle, wheels, etc at its bottom so it was really hard to pull them out. The artist was shocked by this image and then decided to include it in his popular cartoon. In Zootopia, we watched a funny scene in which the main character comes to the small animal shelter. In fact, Mr. Big is an Arctic shrew, a very aggressive and insatiable animal. This character and the entire scene are a reference to Vito Corleone and The Godfather but not many viewers notice. Throughout the movie, Genie turns into many different celebs that most children didn’t know. These famous people included Arnold Schwarzenegger, Robert De Niro, and Jack Nicholson that were very popular at the time. Remember that the antagonist, King Candy says “You wouldn’t hit a guy with glasses” but Ralph does. In 1989, Joker said the same word.

There is a bus moving across when Bold is holding Mittens in a scene of “Bolt”. On the roof, you can see 2525 which coincides with the image of a bus in “Speed”. Skinner is a part of the story “Ratatouille” and his name is inspired by the American psychologist and behaviorist, Burrhus Frederic Skinner, who was famous for his experiments on rats. We can notice that a peach tree appears in many scenes of “Kung Fu Panda” and Oogway’s staff is made from that tree. In Chinese culture, the peach tree symbolizes immortality. It’s believed that peach tree wood scares away evil. Kids probably missed this reference. When Timothy says to Dumbo (which was released in 1941), “Lots of people with big ears are famous,” it was a reference to the “King of Hollywood,” Clark Gable, who also had big ears.

We can notice a scene in which Big Foot is dancing to “Stayin’ Alive”. It’s a reference to Saturday Night Fever, where John Travolta is doing the same dance. In a scene, funny minions dress like a lady to enter the Tower of London. The “lady” is tall enough to get inside. There is a French guy staring at something polite men shouldn’t. The same situation was used in the Wonderbra commercial with Eva Herzigová: “Look me in the eyes. I said the eyes!”

You Would Never Have Guessed These 22 Actors Played These Roles