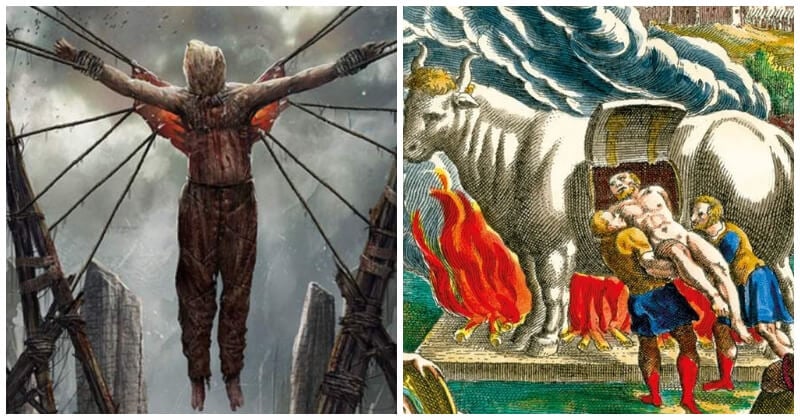 Since ancient times, justice has been very harshly enforced. In fact, the word ‘harsh’ is not enough to describe the horror and weird punishments that had been performed on criminals to set an example for society. I must use the word ‘brutal’ to describe the nature of the ancient punishments. If you were a medieval citizen and you happened to break the law or do something wrong, offend or threaten the balance of society, you would probably tremble at the punishments you could receive. And then you’ll be lucky to have been born in modern times when punishments have become much more humane.

Let’s take a look at 6 of the most brutal punishments in human history and look forward to part 2 of the article.

For funny photos, check out our posts here, here, and here!

This method is one of the most brutal punishments in the article. Victims will remain alive during the process of their backs being slashed, the ribs being bent back like an eagle’s wings, and the internal organs lined up in the direction of the ribs.

#2 Cooked In A Metal Bull

The criminal was housed inside an elaborately crafted hollow bull in bronze. The cow would be heated up and the victim slowly died in agony. The victim’s screams sounded like the roar of a real bull.

In medieval France, those who committed adultery were subject to the humiliating punishment of walking naked in the streets, being humiliated and scrutinized by everyone around them, and having to accept a ruined reputation.

Source: History in the (Re)Makin

Those who were punished had to lie on the ground with a pile of stones piled high on them, increasing in weight. They must die slowly and painfully.

This is the most seemingly gentle punishment here with its origin in Japan. The tattoos would show the crime level of the criminal. For example, a murderer would have a very noticeable tattoo on his head, while a thief only received a simple tattoo on his arm.

In today’s society, animals harmful to humans can be destroyed. However, in the past, a series of trials had to be opened for the sentencing of lethal pigs, mostly between the 14th and 16th centuries.

18 Pics Show That Creativity On This Planet Is Truly Limitless

16 Times Kids Prove That They Are Amazingly Quick-Witted

Need Some Dark Humor To Make Your Day? Let’s Check Out These 23 Comics With Twisted Endings!

When Delivery Drivers’ Left-Hand Job Is Photographer, Their “Proof Of Delivery” Snaps Are Hilarious

Incompetent Mailman Thought He Could Make Use Of Temporary Worker, The Worker Nailed The Route And Got Him Fired

30 Funniest And Wildest Photos That Have Been Taken In Walmart

19 Pictures of People Who Don’t Have Very Considerate Roommates

25 Hilarious Childfree Memes And Jokes Spotted Online, As Shared By This Facebook Page

18 Strangest Wills Written That These Lawyers Decide To Share

21 Tweets About Humorous Husbands That Make Their Marriage Worthwhile